Ralph Walker 1927 Tribeca Building is today one of the addresses easily bringing the ultimate luxury in modern living. Located in New York‘s Tribeca at 100 Barclay it is accommodating 161 unites on its 31 floors. The building was originally designed in 1927 and opened its doors for the first time in the 1930. Now renovated it is showcasing the best of its age with a slew of accompanying commodities for its future inhabitants.

Honoring the legacy of the legendary architect, and bringing it into the 21st century were the talented creatives at the Ismael Leyva Architects, who worked together with developer Magnum Real Estate Group & CIM Group. In charge of the renewed interiors was Champalimaud & GRADE design studio.

Respecting the legacy of architect Ralph Walker was very important for the design team as well as the developers. Walker who designed this iconic Triberca building was one of the most celebrated architects of the twentieth century. He has been awarded Architect Of The Century by the renowned American Institure of Architects.

The now renewed building is now available for occupancy, with two to five bedroom units up for sale. The price? A bargain from 3 to almost 11 million US dollars – $11,500,000 to be exact.

Discover more of the design after the jump: 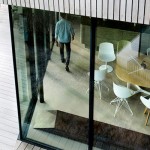 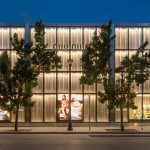