Raffaello Rosselli & Luigi Rosselli Architects recently completed works on ‘SANDCASTLE’, a warm and playful three-storey home located in the exclusive bay area of Sydney Harbour. Set apart by its detailing and calming views of the water, the home rests at the crest of a steep sand embankment and is constructed in handmade sand coloured bricks. Take a look at the complete story after the jump.

From the architects: Located at the crest of a steep sand embankment, Sandcastle is built on a block many considered too difficult to build on; a forty-five-degree slope that presented a climb to reach the house even a mountain goat would find challenging. Yet despite this, and the added constraint of a sewer main running through the middle of the site, our young clients were not discouraged when they bravely chose to purchase the site in Sydney’s Point Piper to create their home.

At the time our clients approached Luigi Rosselli Architects with the vision for their project, Luigi Rosselli’s son, Raffaello Rosselli was keen to collaborate with his father in tandem with running his own architectural practice, and Luigi believed that a young architect would be a good match for the young couple.

The resulting design was mindful in maintaining the natural slope of the site with minimal encumbrances such as stairs and retaining walls, instead the street access at the bottom of the site was partially hidden below ground next to the garage. One follows a winding set of stairs to re-emerge above the entry gate onto a small plateau that offers a view towards the beach across the road. From there a steep garden stair with a rope handrail leads to the front door. Those in the know can hop in the lift, positioned at the end of a tunnel at the street entry level.

Construction was made somewhat difficult by the nature of the terrain; sand tends to behave like a fluid if it is not stabilised. The excavation of large amounts of sand was required for both the lift tunnel and the house. Once excavated the sand was stored on site in large bags and then used to reconstruct the site’s original topography. Raffaello Rosselli defied both the engineers and the landscapers in refusing to construct a series of retaining walls to hold the sand in place, instead a method generally used to stabilise sand dunes, which uses horizontal layers of geofabric to wrap back the sand layer over layer was employed. The sand substrate was then covered with native grasses and plants.

As a name, Sandcastle references the towering castle-like appearance of the home above the streetscape. The three-storey rise of this home is a result of the intention to lower the entry as close as possible to ground level, raise the upper levels to take advantage of the aspect of the site, and create a vertical link from the entry to the living and bedroom levels on the upper floors. Sand as a theme for the site is continued in the robust masonry, handmade bricks by in a custom light colour mix have a rich textural and timeless appeal. Sun screens using the same bricks were designed to provide transparency and shade without weakening the structure. To the middle level of the home there is a private, north facing courtyard with a flat surface to allow the children to play soccer or basketball or cricket without losing the balls down the house’s steeply sloped landscaping. 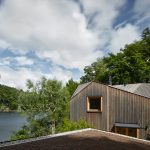 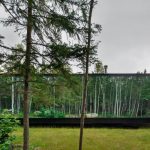