MoMa Arquitectas designed this stunning private residence located in Córdoba, Argentina, in 2019. Take a look at the complete story after the jump.

From the architects: The house is embedded in an extensive plot of lush tree species located in the southern area of the Córdoba City, Argentina.

The project is made up of two pure volumes which are perpendicular to each other. The lower one, lodging the “social” space of the house, is arranged across the land, closed towards the street and open towards the landscape. The upper one, more private, is oriented to the central garden, privileging the visuals and lighting.

The ground floor is presented as a solid volume, with two stone bases at each end plus a perimeter beam of exposed concrete that links them. The upper floor rests on a light metal structure, generating a lower void in which the gallery is arranged.

Inside the social space, two large wooden cubes were raised, containing mobile enclosures, with the intention of generating fluidity and spatial integrity. The continuity with the outside is achieved directly through large translucent cloths in all rooms. Same effect, but in a more controlled manner, is in the bedrooms , with metal parasols.

The staircase is the connection point for both volumes, where two skylights illuminate the simplicity of its pieces.

House’s materials (resolved with stone, exposed concrete, metal and wood), accompanies the simplicity of its geometry.

The exterior space design consists of contrasting and complementing the strongly rational orthogonal (morphology of the architecture and the environment that still has peculiarities of a semi-rural type) with organic forms provided by the layout and by the existing and proposed structuring vegetation. This formal decision tries to establish a link with images of elements from the natural landscape of the characteristic mountainous area of Córdoba.

The proposed counterpoint gives rise to the generating idea: Natural-Artificial. Thus, it is sought to link the inside with the outside, by contrast and complementarity plus the organic with the geometric, also defining in this way the transitions as a connecting link.

From the functional and morphological characteristics of the proposal, three large sectors are defined: Entrance garden – Gallery / Pool – Meadow / Grove.

The first one, assumes the transitional role between the public and the private areas, while the second one is the social area provided by two main elements: the gallery and the pool. Finally, the third one, orientated to the south, is made up of two big areas: the meadow and the forest. 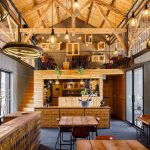 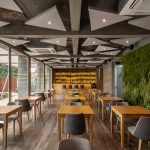