Anonym designed this stunning two-story residence located in Nonthaburi, Thailand. This refreshingly modern project was completed back in 2017.

Architects had a task of creating a private living space while hiding the house from it’s front street facade but also two extremely nearby plots. The design team has used the greenery to give the residence a sense of privacy while inviting the natural light within the space. The task was challenging due to extreme proximity of two story neighbouring houses located on each side of the plot.

Another twist in the plot, no pun intended, is literally the Y shape of the plot forcing the architects for a more innovative design of the house.

Take a look at the complete project after the jump.

From the architects: Y house opens a dialogue with its existing context through the rhythm of building skin layering. It brings about the perception of the flow of spaces from the context to living spaces of the house. The relationship creates enclosed spaces and environment that provides privacy, while connects the house to the urban ecology in harmony with lives inside. The house, designed by Anonym Studio, is composed of four bedrooms, two sitting rooms, and one studio.

The architects, Phongphat Ueasangkhomset and Panduangjai Roojnawate, use limits of the Y-shaped land plot to form small courtyards and gardens to achieve a microecology of the house, connecting living spaces together. They also employ a formal difference while the articulation of the architectural skins and mass creates visual sequences that reflect the owners’ memory and long-established relationship with the neighbourhood. While one walks through the spaces, one can perceive different fragments of the urban context through the various layers of building skins.

Even though Nonthaburi province in which the house is situated is one of the satellite cities of the Bangkok Metropolitan Area that has a certain distance from the chaos of the centre of Bangkok, it does not mean that the rapid changes of Bangkok will not affect the context of this house. For the house stands in the midst of constant changes of the metropolis, an attentive solution to the visual and psychological distance between the house and its context becomes crucial for creating the living spaces.

The environment of the house itself is designed to be both protective as well as open towards the changes at the same time. Under such limited circumstances caused by the particular Y-shape of the land plot, the plot size, and the functional requirements, the architectural language of the house is articulated within the relationship amongst the small open courtyards, narrow strips of the garden along the house, and the layers of the skins.

The architectural elements, therefore, plays a role of interlocutor with the context and life. The architects use the layering of surfaces to achieve the effects of various shades of atmosphere for different functional spaces, keeping the shades of perception of the surrounding context in harmony with life inside. So it brings about another form of living “with” the ever-changing urban context.

The white painted steel brise-soleil brings about superimposition of visual perception that draws the surroundings into the interior spaces. The vivid and colourful row-houses or the detached wooden houses in the neighbourhood are not cut out but appear from time to time when one moves freely inside the house and become a part of the environment of the house itself. All of these form a conversation in which the house pronounces its speech to the context by exposing its identity and differences through a simple form, while it still listens, observe and perceives what is going on in its beloved outside world. 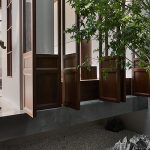 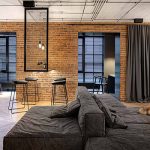