The Raw:almond pop up restaurant is the winning design by the British studio OS31 to be erected above a frozen river in Winnipeg, Canada.

The restaurant will serve as an attraction to the Canadian city’s annual winter festival and will open to the public on January 22, 2015.

Continue below for more of the design: “The design creates an expressive frame that floats across the ice like a frozen jetty, whilst providing a dining experience that is clear from structure,” he said. “The exterior and interior are expressed as separate forms, one enclosed inside the other.”

Spaces inside the restaurant will be framed by faceted white walls, described as being “sculptural like drifts of snow”. “The plan is made up of two clashing geometries,” said studio founder Tony Broomhead, who designed the restaurant alongside architects Matt Pearson and Ross Jordan. 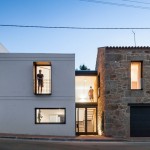 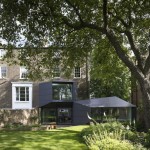