Austrian architect, Jochen Specht, stuns us with a new project, HausHaus Holen. Creating an extension to a house to accommodate a family of four. Located on a hill above Dornbirn, Austia, the house stuns us with is waterfront view of the Rhine Delta and Lake Constance.

Continue below for more: The house was originally built in 1961, but needed to be expanded in 2012 to accomodate a family of four. The extension was designed by an Austrian architect, Jochen Specht. As the architect says, the only part of the building worth preserving was the original stonework. Thus, the house was gutted in the first place, whereas the obsolete fixtures and traces of unsuccessful refurbishments were dismantled. To merge the house with the surrounding greenery, the architects used a lot of glass to cover the house. Notice the arrangement of the windows that provide the view of the valley and the forest from different perspectives. Together with randomly arrayed closed wall elements, the windows generate a sophisticated pattern façade which offers both open and more shielded indoor spaces. The dark colour of the house also harmonises with the forest in the background. Haus Hohlen is an excellent example of architecture that is sustainable and modern, and exists in a harmony with nature. 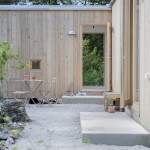 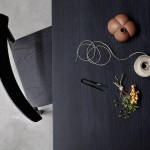