The site and the building are made physically accessible through pedestrian and vehicular pathways and a drop-off area has been provided for maritime access. By engaging the sea with the city, not merely visually, but also physically, the core of the I-Opera houses an open and apparent public space. A multitude of functions have been introduced through the building; they range from the public bamboo “forest” around the site, to the public pool in the heart of the building, to the specialized shopping area, exhibition space, a cafeteria, a high-end restaurant, and a children’s playing zone. Structurally, the box acts as a stage structure from which three entities are hung: the opera house and its facilities, the exhibition space, and a multifunctional block with a specialized shopping space, a convention space, etc. On the ground floor, the project is made up of three main functions: The Opera house (ritualistic space), the open public core and the flexible theatre that connects with an outdoor platform where boundaries between inside and outside are blurred. From the heart of the building, three emphatic escalators offer the visitor the choice to reach the different activities of the building. Passing through the concave exhibition space, a circular ramp connects the lobby to a public outdoor podium on top of structure. A translucent skin and a continuous flow of circulation allow a dialogue between the building and its surroundings but also within the building itself. The latter, like in an opera, can incorporate different performances at the same time: a pop concert, a conference, a Puccini opera, and a swimming race or a ballet. Like an all-seeing eye, the space on the rooftop has a 360⁰ panoramic view of the city and the ocean, and of the multiple activities taking place around the project. It allows the visitor to be more than a mere spectator (at the exhibition, the opera, the concert…), but also to be part of the performance, whereby spectator and actor become confused. The I-Opera becomes a medium for life and performance to intertwine, making the visitor’s experience of the space much more real, authentic and interactive. Building in a sustainable way is vital to the future of construction and to the well-being of society’s future. Sustainable construction is a fundamental part of the client’s and design teams approach to this project and has influenced its design. This has focused on three main areas minimizing material use, embodied Carbon and Carbon emissions.

The key to reducing CO₂ emissions in any building is to address how energy is used. Reducing energy demand within this building has been the primary driver for its design. This has influenced the building’s form which is known to be the greatest influence over the long term energy performance. Where possible, the building’s energy use has been kept to a minimum as this directly impacts the quantity and capacity of renewable or low emission energy sources required. The aim is not only to reduce CO₂ emissions, but also to achieve a higher level of its absorption. For that reason, the site will be planted with bamboos, a material that absorbs 35% more CO₂ than other plants. (Francisco Gallo Mejia) Bamboo is a local material that is known for its strength and resistance and because it is a grass rather than a wood, it grows far more quickly than a tree. The plant’s extensive root system continually grows underground and it replenishes itself naturally, as grass does. Unlike trees, bamboo will regenerate quickly, making it a renewable resource. Bamboo is one of the most versatile and sustainable building materials available. It is exceedingly strong for its weight and can be used both structurally and as a finish material. Planting a ¨forest¨ of bamboos around the site puts forth its remarkable qualities and characteristics. The versatile characteristic of bamboo will also be exhibited through the display of music instruments crafted from bamboo.

The building works as a self-sufficient organic system, harvesting solar energy by day and using it to illuminate the screen on façade after dark, mirroring a day’s climatic cycle. A famous example of this technology is the Media Wall in Beijing with its first venue dedicated to digital media art. It offers the first radical example of sustainable technology applied to an entire building’s envelope to date.

Each façade is divided into sections of approximately 1m wide by means of vertical steel pillars. Within these areas, LED panels are managed by a central PC that can change the building’s skin according to needs (entertainment, advertising, culture, information and projection screens for events). 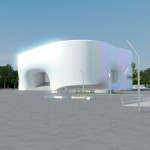 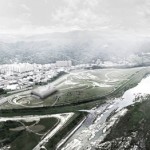