A tremendous sign, a bright image, a new form, an extreme individuality, the main element of an urban «cluster», a shape, absorbing plenty of concepts with the basic one of an idea of «separation without division», merging of diverse – External and Internal, Elementary (the external cube-shape) and Complicated (the internal structure of the building), Ref lective (texture of outside surfaces – metal sheet) and Absorbing (the red color of the internal structure, drawing attention of an observer), Horizontal and Vertical lines having changed their location in Space in the course of a New Form creation Game.

Inverse concepts, merging in a single form, create an image of Life Harmony where all live nearby and nothing matters much, where a strong form is simple just outwardly and the internal knows its limits, where plenty of differences have been united by a common idea and are ready to cooperation, merging and mutual penetration.

An elementary form of a cube placed at one of the corners – a spatial hieroglyph, is revetted outside by metal sheets, ref lecting the Earth and the Water by its bottom facets, and the Sky and the Sun by its top ones and uniting in itself all the four elements of the world, the Top and the Bottom, presenting its inner space to a Man, a Game of Life, a Theatre.A visitor, travelling from level to level and finding himself on internally-external spaces, has an opportunity to observe the inner life of the building. Some of ballet classesand rehearsal rooms, kitchens of restaurants and stage designers’ studios, stages, offices and some warehouse facilities open over here. All this tells about enormous efforts of hundreds of people creating a fascinating show – Theatre.Open stages – amphitheaters soaring between the Heaven and the Earth, observation decks, accessible to Everyone and located at every level of the building, including the main one at the top of it, fascinating ocean and city views, an unforgettable journey inside the Game Cube, transfer from facet to facet, from level to level, from Internal to External is an overture to the basic show which awaits for the spectator in the very Center of the Cube, – where the Show, the Game begins.

Plenty of visual associations: a faceted crystal, a blooming flower, a «pagoda without the socle» – allow a spectator to memorize an image of the building for long. The shaping concept of the buildings is based on placing simple forms together with their capacities and location determined by their functional tasks. The outside shape of the achieved agglomerate is made by cutting off the surpluses to make a cube form put on its edge. The esthetics of the given object depends neither on a separate turn of any of its parts nor on their size or quantity, but is defined by lots of similar but different elements with its external shape of an ideal Platon body in an unusual twist.This feature allows to rearrange capacities if necessary /updating of the project specification/ keeping the initial image of the building completely.

The absence of the main facade allows to watch the building from all points of view equally, which is extremely important for an object-landmark. The building has the same shape both for a sea and a city traveller, who has find out himself on the new Buzan embankment.

The cube is located in the center of an artificial reservoir, its supporting corner plunges into the water and makes the impression that this unbelievable construction has no support at all with the water horizontal line marking inclined sides. The water surface is cut through by three aperturespictograms from which water pours into the pools of enclosed courts located under the reservoir. The enclosed courts have leisure facilities, cafes, theatre box-offices, stores and small theatre shops. Visitors can get into these courts directly from the embankment or just walking along the ramps cutting the reservoir through.

Two bridges connect the platform to the city: transport&footbridge at the northwest which gives an access to cargo facilities located under the reservoir and close to the supporting point of the cube (nucleus) with vertical transport. Also there is an entrance with an U-turn, able to receive theatre stuff transport and (or) buses with tourist groups as well as physically challenged people.The second western bridge – is the main entrance to the theatre territory. From the embankment area it rises to the theater lobby to the level of + 13.000. While climbing it the visitors pass the construction watching the pictograms of the reservoir and making the impression of the theatre at a close distance. Also it is possible to get down to the reservoir and to the bottom bypass area walking down the footbridge and there under the shelter one can walk round the peninsular, get into courts and enter the theater.A theater lobby – is a multilevel main entrance, while receiving guests it gives the opportunity to provide security control. Opposite to it there is an information desk and a theater poster /current performances announcements/, further there are toilets and a cloack-room with a ladder leading to cloack-rooms of the lower f loor of the lobby. Top f loors of the lobby include media library facilities, cafes, leisure areas. Visitors are lifted to the two theatre halls by escalators and panoramic lifts.

The main hall of 2000 seats – is a traditional multitiered opera hall. The outside surface of its balconies together with the f loor, ceiling and seats are united by color and material. The inside surface of the balconies and boxes is in contrast to the outside surface and while repeating the color of the front finish /red and metal/ it creates a holiday-tense character. And if at the beginning while entering the metal cube one gets into the red space of the lobby and foyer then while entering the hall he as though once again crosses the border, but finds out himself in the internal and deeper world. Cut surfaces of the hall allow to achieve the necessary acoustic effect. The small hall of 1300 seats has a combined finish of wood and metal. Niches for boxes like in the big hall – are made in red. The space is closed by a vertical ring and has two lateral surfaces with the plastique of boxes and balconies. Wall ledges are directed to the scene and make the impression of a listening creature.

The Hall foyer – a two-level space with the top area which adjoins the outside wall and has apertures in the f loor, allowing to view the landscape and the walls of the building going down. 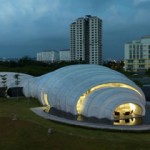 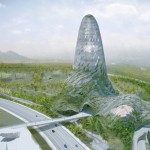