Project: Meeting the Sea Through Memory
Designed by Oiio Architecture Office
Project Team: Ioannis Oikonomou, Grigorios Vegliris, Stiv Dimitriou
Location: Heraklion, Greece
Website: www.oiio.gr
Greek  Oiio Architecture Office won the 2nd prize in a competition for the ‘Regeneration and Reuse of the Western Historical Docks and their surroundings’, held by city of Heraklion. For images and architects description continue after the jump:

In the process of the visual orientation of the new cultural hub the city takes a step back forming an urban sack. Urban cohesion and integration of the monument is promoted through the articulation of the elements of the sack on the flows of the city. Gathering all those flows in a common point of convergence a landmark is created which concentrates and diffuses visually the flows of the city operating as spatial tool for the portrayal of the city’s function. The interior of the urban sack is organized in three thematic spaces the cohesion of which is promoted through the mixing of the elements of the contemporary role of the monument with the remnants of the old. The proposition promotes the rising of the Arsenali as a fully functional part of the city through its collaboration with the square. Towards that collaboration as main aim of the composition becomes the treatment of the square as a neutral canvas where the monument will be able to play it’s role without visual distractions. The collaboration of the square and the Arsenali produces an exhibition space which does not take the form of a single foreign body inside the monument. Instead it communicates spatially with the monument’s typology, giving, at the same time, emphasis on the sprawl of the exhibition on the entire surface of the square. The sprawl of the exhibition is based on the installation of wooden surfaces which carry the same size and form with the Arsenali’s internal openings. Designed to revolve around their own axis the surfaces constitute, in realty, doors, which are placed under the arches of the Arsenali, distributing the flows of the visitors. The wooden doors are dispersed on the square through the installation of sockets in which they interlock. The sockets provide the electricity needed for the display as well the equipment needed for the movement of the door around it’s axis. The dispersal of the sockets on the entire surface of the square produces a dynamic exhibition space whose form and hierarchy is each time adjusted to the character and needs of the exhibit. 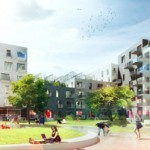