Cubo Arkitekter designed this new Visitors and National Test Center for the world’s largest wind turbines placed on land.,ocated in Thisted, Denmark, in 2017. Take a look at the complete story after the jump.

From the architects: In 2016, Cubo won the architectural competition for a new Visitors and National Test Center for the world’s largest wind turbines placed on land. A Center that communicates the research and technology of the windmills to the public, while the wind turbine industry in collaboration with DTU and other research institutions carry out research, development and tests of prototype wind turbines and new wind turbine technology.

The Visitors Center is open to visitors who would like to experience the gigantic wind turbines and gain more knowledge about wind turbines, wind energy, sustainability and projects of restoring and preserving nature. The location of the center is in the Danish nature reserve of Thy.

The new Visitors and National Test Center gently inserts itself into the surrounding landscape as a slightly raised linear structure with a hovering appearance, which only lightly touches the terrain in order to preserve the local biodiversity.

With its curved roof and fiberglass facades, the center appears as an architectural whole in a direct and natural coherence with the landscape and the large-scale linear Test field. 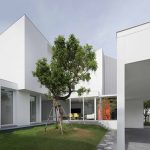 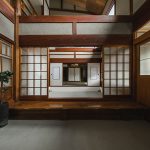