Wutopia Lab shares with us their work on the proposed project for the Aluminum Mt in Mt. Luofu, Canton. Originally the space served as a Traditional Chinese Medicine Health Industrial Park Exhibition Center of Ping An Real Estate and Guangzhou Fangyuan Group. Today, with the reshape by Wutopia Lab the city of Guangdong in China has a marevelous landmark to be proud of.

Discover the project in the words of Wutopia Lab:

If you see me, weep

It was pouring the day I visited the site. The rising mist blocked my view as I walked in the field. Then the rain grew so heavy that I had only to stop my journey. Fortunately, it stopped as quickly as it had started. It was in that moment that the Mt. Luofu, a well-known Taoist mountain, surfaced. The moment of revealing hit me, like a sudden appearance of a Chinese celestial palace. Like all poets and travelers, I named the moment “the sudden emergence of Mt. Luofu”.

It was precisely the moment that later proved a decisive one, a meme struck me when I caught sight of the reflections of the Mt. Luofu and Taiping Mountain that faced the south of the site. The meme was a classical but a most spiritual one in the literature of the Chinese garden, which was “one sea and three mountains.” Immediately I decided that the fish pond should be remodeled. Along with two other mountains, an artificial mountain serving as a presentation centre would form a new version of “one sea and three mountains,” an earthly paradise.

Abstracting Find the beauty, be still

I can explain why I used the circle as my basic geometry in this design based on Taoist and Taiji. Circles and cones were basic geometries to construct the mountain. An ambiguous mountain was preferable, which would consist of three smaller mountains, influenced by the Taoist doctrine.

Immaterialized  These are hollow mountains

The ‘slivering’ aluminum board would be an ideal material for the mountain. There should be a moment when the heavy mass and texture of the aluminum material ‘dissolves’, providing a perfect foil for the lightness of the mountain. Thus thinking, I used three different aluminum boards with perforation rates of 45, 60 and 70 so the mountain behaves from dense to sparse from top to bottom. The effect was that the mountain looked overwhelmingly heavy most of the day, but lost its massive look when perceived from certain angles. At night, with the lights on, the mountain would lose its materiality and be transformed into an enormous mountain of lamp. In this way, the mountain assumed an ethereal look.

My first view of the floating Mt. Luofu kept coming back to me. It seemed reasonable that I wished to design a mountain that hovered like it did. Not only did I place all functions underground, but I also introduced a gigantic metal roof supported by six concrete columns as its body and placed luminous films on the bottom. As a result, when the light films were turned on, the mountain could really “hover”.

The Aluminum Mt. was supported by six concrete columns. To build this 880-square metres with a cantilever structure up to 10 metres, 30 tons of iron truss were applied in order to shape the subtle and hovering peaks. Regarding to the 11.9 metres spiral staircase, it was an independent structure travelling from basement to the top. It was not an easy task, but precisely the hard work made the Mt. slivering.

If we are not exploring, we’re not doing anything

I designed a water path that led to the third mountain. The viewers could disembark at the round reception and get aboard a red boat at a dock that was surrounded by U-shape glass. Travelling past some flowery, round islands, they would arrive at the bottom of the mountain where a staircase and a tunnel ushered them right to its interior. There they could view across the mountain bottom and the water, and meet their upcoming path in the gentle breeze. Then they could enter a big, round sunken garden by a spiral staircase or a lift placed at the entrance to the underground.

This world is as mere mist and silk

In the Aluminum Mt., I would prefer to apply colour grey than marble and metal, colour white or concrete. Grey is a perfect and subtle colour to present a continuous interior landscape as a Chinese Ink painting and echoed to the sudden surface of Mt. Luofu. A subtly dyed ‘mountain’ inside the Aluminum Mt was presented.

Take the time that needs to be taken

I wanted to create a slowed sense of time. I used continuous circles to form the underground space, a bubble-like maze that included the foyer, display zone, video room, conference room, model exhibition space, art gallery, office and toilets. I hoped that visitors could lose their sense of time and space. In a layered maze, we might feel that time was slowed. The central exhibition space was a triple height space, serving as the highest mountain among the three. The other two functioned as sinology space and VIP rooms. Wind blew through the ground floor, underneath the third mountain. What was left was nothing but time.

The path from the grave to the world beyond

Through artificial fog, the viewers would mount by a spiral staircase to the top. This was the second peak of the Aluminum Mt. They could follow the path and reach the top of the mountain. I used to imagine myself with Mt. Luofu and Taiping Mountain under my control. But today I have become more humble. Looking at the mountains with the breeze blowing, I felt much better.

Shadowing the edges of sight and spirit

The Aluminum Mt. was named the Third Mountain. Since it was constructed on the Mt. Luofu, it should not become a sales centre that is eager to show off itself. It should present a lifestyle that was lost upon us, some dreams that we urban residents are dying to realize. In a humanistic space full of symbolic meanings, a space built with modern technology while exhibiting traditional wisdom, we are supposed to feel happiness. To bring a beautiful life: such is the meaning of the third mountain, a celestial palace of our time.

For a closer look of the The Aluminum Mountain by Wutopia Lab architects discover the architectural drawings: 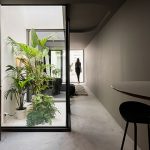 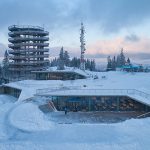