Reinventing the Veranda
Opening up a Federation Queen Anne heritage listed residence is the dream of many home owners on Sydney’s North Shore.

The northern suburbs on the Sydney harbourside, from North Sydney to Mosman were rapidly developed in the first two decades of the 1900s, thanks to the new ferry services and expansion of public transport links.

This house possessed all the attributes a wealthy family would desire: turrets, large rooms, balconies and a generous garden, yet it was introverted and dark. By adding a wide sheltered veranda to the rear of the house, the kitchen and breakfast room can be opened up to the garden. The veranda can open completely to allow the homeowners to step out onto the lawn or to the pool area, bringing the outside inside and vice versa. Protection from the hot western sun can also be provided by closing the wooden shutters or tilting the blades.

While the front of the house is adorned by the original timber balconies, soft and attractive spaces, but seldom used, the family gravitate to the back of the house, in the newly reinvented veranda: unfolding the panels, easing the louvred roof, sliding open the massive glass doors, going bare foot and breathing in the garden scents.

The original Federation Queen Anne setting of the old house is a treasure trove of paintings, sculptures and books. Modern art thrives in the heritage laden spaces. 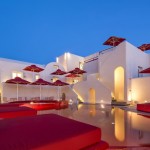 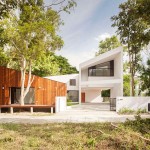