This sustainability of green has great importance for he city and especially the Dokuma-Otogar District. It is a fact that as a land of yearly average 18C degrees, more livable zones will appear thanks to the microclimate of trees. Therefore, it has been dwelled on the existence of the trees and a complex that will be a base for any possible ecologic interferences in the future all throughout the design process. In this direction, designing steps and decisions are formed as following:

1- Lands of the existing trees have been noted
2- The places that trees let the site to dig were dug about 4 meters to supply deeper shadows in courtyards. (lank form of samphire tree, which is available intensely in site, gives us some ideas about also its roots. Several trees -in collapsed courtyard owing to their tap-roots- are protected in big pots. These pots are sometimes functions as banks and sometimes role as a poster board. At the same time, these pots become columns of new fringes inside collapsed courtyards.
3- The current road inside the site was not changed but refined. A new pedestrian way connecting the east and the west sides of the site shaping with the route are determined by trees.

4- The main building complex was separated in two parts at the crossing point of pedestrian ways. Both of the collapsed courtyard on the east side of the land and the inner gardens, was left for wedding hall. And the west side was left for conference and other activities. They are nested but also separated from each other.

5- The roof of the hall with a capacity of 300 people, which is inside of the building, was designed as an amphitheatre fronting collapsed courtyard. This amphitheatre creates a new way for pedestrians and makes an ambiance for open air organizations.
6- The management units and the vertical circulation elements providing access to the conference hall was placed above the hall with a capacity of 300 people. In this way, the management units are positioned to control the road and all of the inner gardens are connected with entrances to the collapsed courtyard elevation. 7- The structure of the conference hall positioned on the vertical circulation pillars, above another part of building, with a different attitude from the building settlement inside collapsed courtyard. That provided a triangulation which can be seen by every point of collapsed courtyard and by the road.

8- Lastly, canopies were placed to increase the shadow density in the de-elevated yard. Apart from shadowing, these canopies created a second axis of circulation that gives access to all around the building at ground level.

The steps for developing the massive composition were emerged by these decisions:

1- Pedestrian-vehicle way is kept with refinement of its direction in the site, has become a centraline, which is enough for the expected heavy pedestrian traffic the east side of the city. We named this line ‘Culture and Intersection Centraline’. It will also become a cultural centraline, which is linking the main road and the primary school, that will be built in the future.

2- In the current situation, the site cannot connect the east and the west sides of the field because of the intense green belt included with the areas at the front and the back of it. So, a second pedestrian way was suggested in an appropriate direction according to the trees. We named the way as ‘Crossing Centraline’. The crossing point of this two pedestrian ways is also the point that the construction composes and gets partial on.

3- Since the wedding hall has been left at the level of the de-evelated yard, skylights has been placed in foyers, wedding hall and celebration halls in order to supply them with natural lightning and air conditioning.

4- Making the skylights as colored glass cubes, the roof of the wedding hall is turned into a light park at night

5-Conference hall has been separated from ground surface. Thus the connection between the hall and the trees below, has been removed. New living areas has been formed under the separated structure and also it has become a big eaves which shades on collapsed courtyard.

6- Close textured vertical sun-breakers were used to decrease the effect of the horizontal sunlight on the west facade of the structure of conference. In arrhythmic facade composition these tears have become some empty spaces that let the branches of the trees below, to get into.

7- With the help of moving pavement panels and foyers designed at varying elevations, different altenatives of hall possibilities are presented in the conference hall.

9- The wooden prism that is looking at the city, trying to blend in with the natural life without doing any harm. 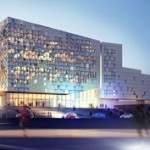 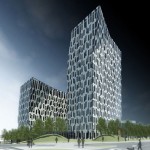