A challenge comes up to us : Inventing the 2012 London’s Olympic games pavilion.

THE ENTIRE TRAFALGAR SQUARE IS THE PAVILION. The pavilion has been kept to  its minimal aspect : 2 boxes made of polycarbonate and steel structure which are wrapping the program as a jewel case.

But the whole Trafalgar Square becomes the pavilion. As if itwas overwhelmed by the games.The square will be colonized by a balloons canopy. AFTER THE OLYMPIC GAMES’S RINGS, HERE ARE  THE OLYMPIC GAMES’S BALLOONS. The balloons will be made of a recycled and recyclable plastic which is usually used to produce drinking plastic bottles : the PET (Polyethylene terephthalate) It is probably one of the most commontly recycled material and it is easily available.

Beyond the poetic aspect of the balloons ,that their shape is for sure connected to sports, the balloons will enhance the square with multiple functions during the games.

There will be several types of balloons with different characteristics :

·         Some balloons will have a very important biological characteristic: the ability to absorbe CO²  and reject O² instead, which will produce a cleanner air.

·         One of them is the giant balloon screen on which the most important live competitions  will be shown.  The national team for example !

PAVILION SPACE’S FUNCTIONNING. The multipicity of those balloons will allow to show different competitions at the same time. That is why we created four entrances on the pavilion site. They will all be showing different moments of the Olympic Games and the visitors will be able to interact with what they are most interested in, and to easily swap from a sector to another. TO DISAPPEAR,… OR LETTING A TRAIL BEHIND? The repetition of this shape is also a recall of the solar system and to humanity sharing universe, and sharing the same interest in « sports ».

We can imagine a huge drop of a part of these balloons on the Olympic games  closure’s day as a signal. We will also propose to keep a part of those after the games, as public light ones or air recycling ones.

We dream about a temporary and lucrative intervention, that will evolve according to the games, and according to user’s interventions with it. We dream about its interactivity with the city creating events like ballon drops, or letting a trail behind like permanent public lightening and air cleaning systems. 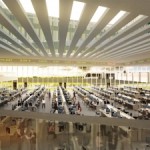 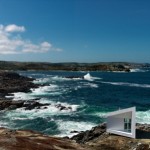