TEMP have recently completed their latest project – a runner’s station inside Beijing’s Olympic Forest Park. On one of the park’s open plots, the architect erects two structures that house female and male shower rooms respectively. They mark the perimeter of a public square and open it up to visitors. Discover more after the jump.

The runner’s station is built inside Beijing’s Olympic Forest Park as a public utility. Like others around China, this sports park that held the 2008 Olympic Games were tasked to install supporting services that better serve the locals. Hosting most Beijing runners around the year, the park commissioned TEMP to design a stop where runners can meet, store their belongings, buy drinks, and shower.

On one of the park’s open plots, the architect erects two structures that house female and male shower rooms respectively. They mark the perimeter of a public square and open it up to visitors.

During onsite studies, the team observed runners stretching with whatever natural props nearby — stones, trunks or branches. To address this need, the architect proposed to install multiple stretch bars that curved to various directions, to fit all body types. The slender white curves of the bars serve dutifully among the trees, blending into the curvy branch lines and white trunk paints.

Arcades that Open and Enclose

Across the site, arches take on various functions and shapes, balancing the rigidity of these rectilinear structures.

With both sides opened, the arcade welcomes traffic from all sides and merges with the plaza. Several parabolic arches form an arcade that shelter lines of lockers. Raised by flat and steep curves, the arcade yields a powerful symmetrical presence in the open air.

A repeating series of arches enclose the showering rooms, with translucent glasses guaranteeing privacy as well as natural light during the day.

As one walks through the interior passage, the inverted blind arcades underscore the building’s role as a communal place. The facility not only serves the public functionally but also highlights aesthetic values of design. 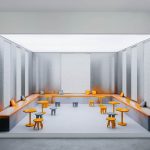