The Sprengel Museum extension has enormous potential for change in that the museum must be experienced as a part of the place in which it lives. The museum site is isolated between a road and an area of houses cutting it off from its urban context and separating it from the banks of the nearby lake. Set on a plinth, the museum demarcates itself from its immediate surroundings as a sacred space. The building is articulated around a longitudinal street dividing it into isolated spaces.

AN EXPANDED MUSEUM
Our proposal seeks to create interaction between the museum site and its immediate surroundings, between a building and a topography, each with their own histories, and provide a contemporary perspective radiating out over the city, the lake, the garden and the museum’s plinth. The project’s verticality enables responses to all the project’s challenges in a single gesture: the connection and enhancement of the plinth, the institution’s visibility, the renewal of its image, the creation of diverse and flexible exhibition spaces, a dialogue with the existing architecture, and an exhibition garden with a carrousel. The potential of our proposition is its conception of a museum not as a recomposed, composite architecture but as a global entity whose components can draw mutual sustenance from their respective heritages. The multiple, fragmented viewpoints characteristic of the Cubist aesthetic are applied here within an architectural logic: the museum announces its presence to the city whilst enabling the landscape of the lake and the city, the spaces it seeks to embrace, to penetrate within its confines. The envelope is studded with a double network of points, creating a kind of kinetic game of constantly changing viewpoints for outside observers, enabling them to visually interact with the new building.

FLEXIBLE SPACES
The vertical configuration, structured by the stacking and staggering of its component spaces provides an enormous possibility for modularity and flexibility: When closed, these volumes become pure ‘white cubes’, the classic conceptual exhibition space. When staggered, they open up intermediate rest spaces between the exhibition rooms, bathed in natural light. Balconies looking out over the cityscape act as havens of rest, and become an integral part of the visitor’s itinerary through the museum. When open, the exhibition spaces create a dialogue between the works inside and the cityscape they reflect.

A TACTILE SPACE
The gardens complete this field of possibilities, providing a tactile universe and an alternative, exterior exhibition space as an extension of the museum visit. The diffuse landscape of the garden’s vegetation, towering over visitors, provides a sensual experience within the museum, a living, natural environment with a gravel floor and places to sit or rest. The new museum is multi-faceted and resolutely open to visitors, whose presence gives the building its cultural raison d’être. 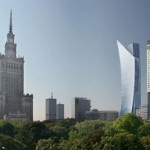 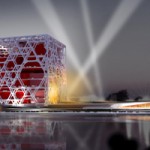