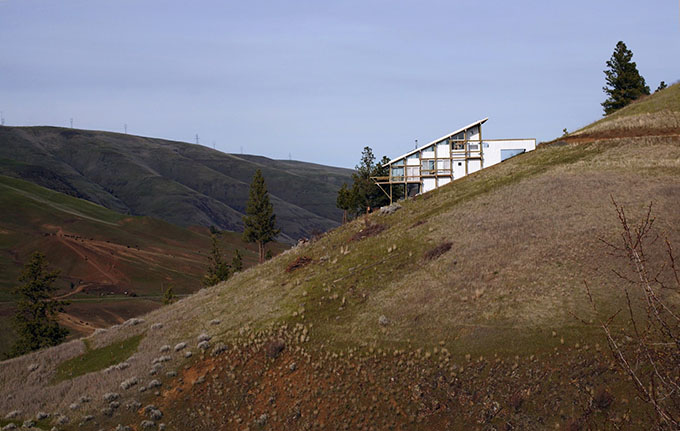 Paul Hirzel designed this isnspiring canyon retreat located in Juliaetta, United States, in 2003. Take a look at the complete story after the jump. 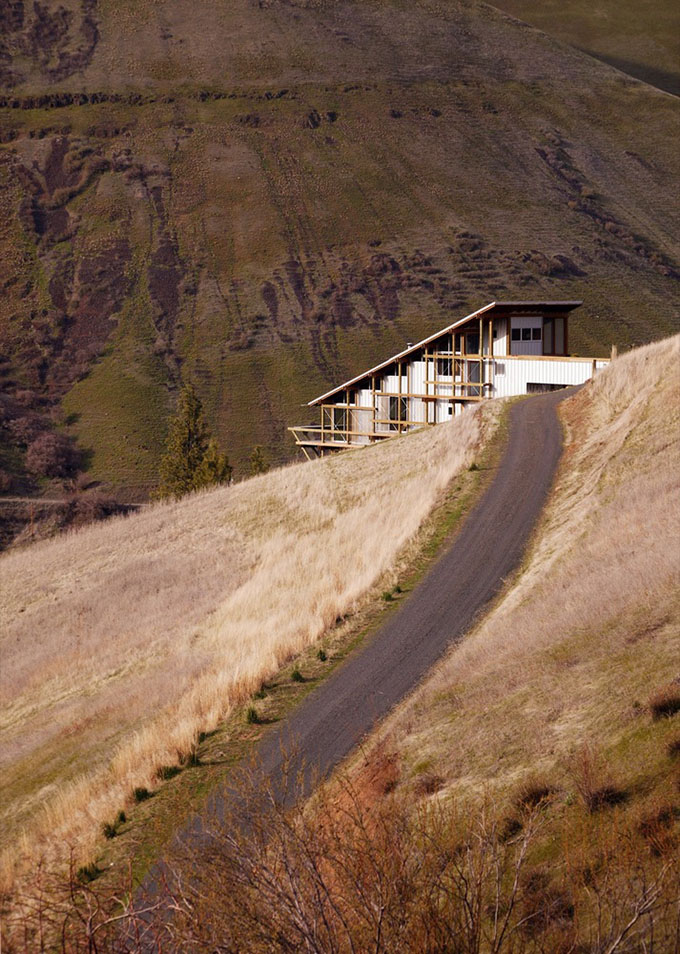 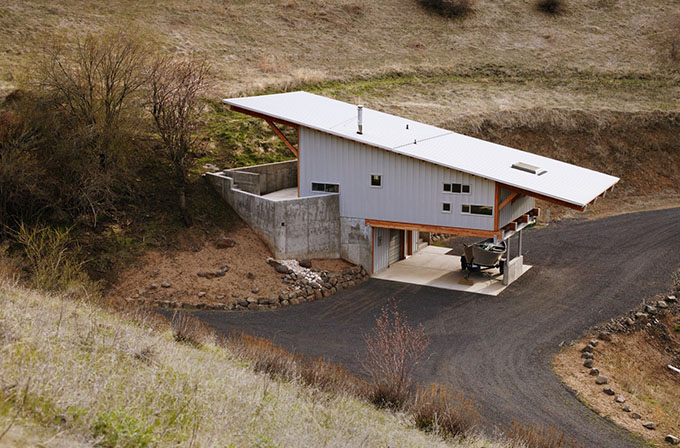 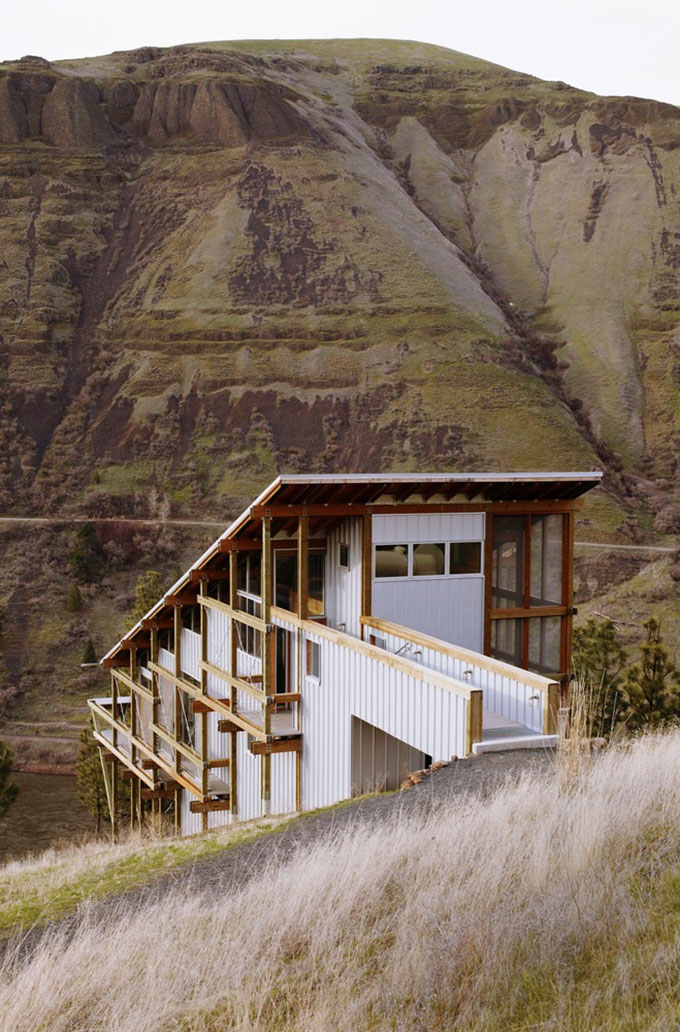 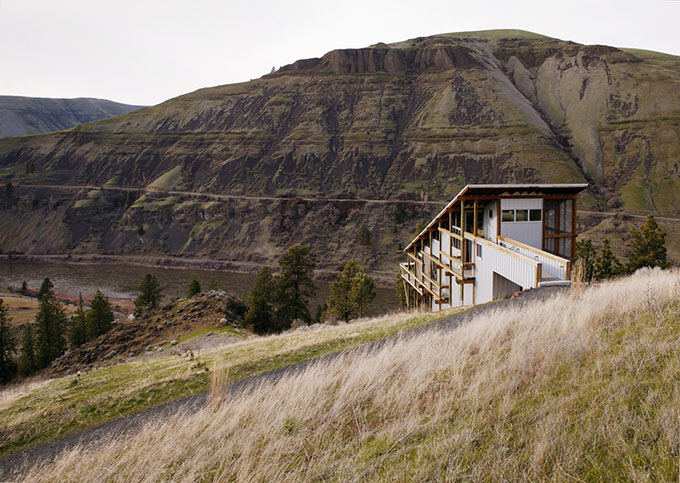 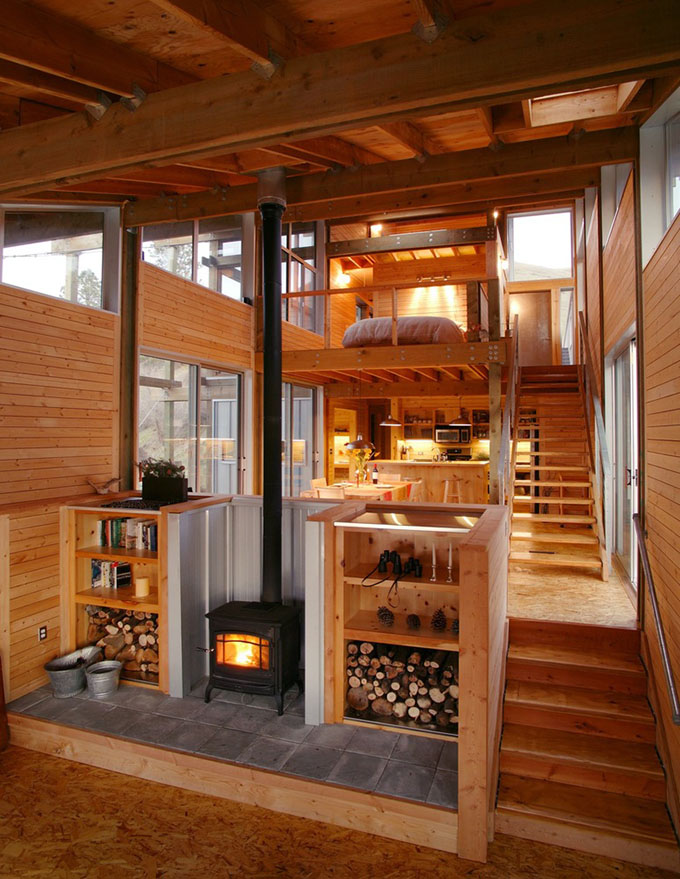 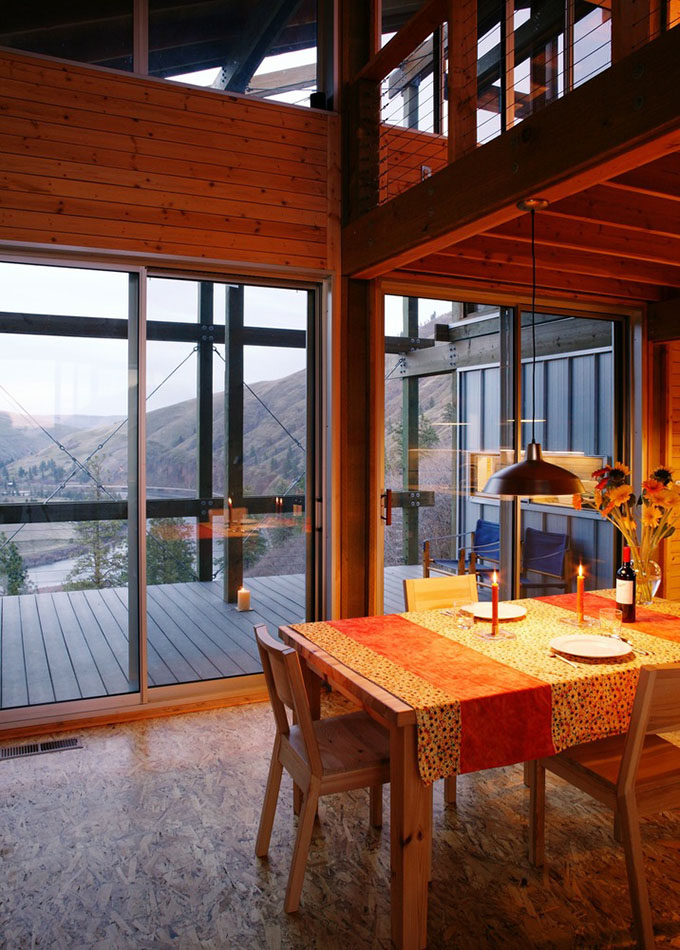 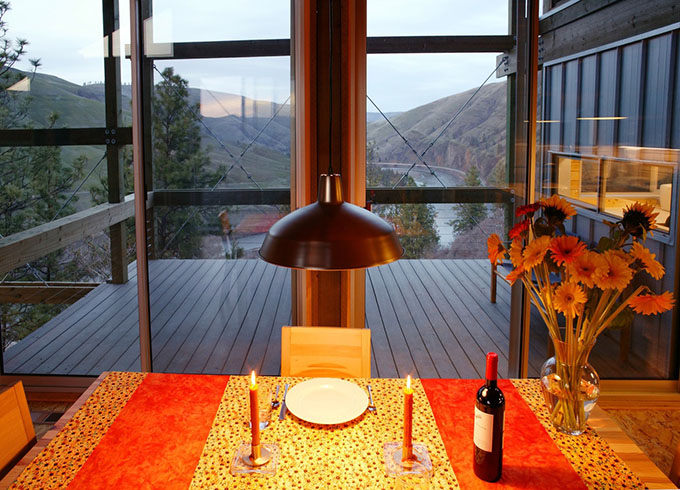 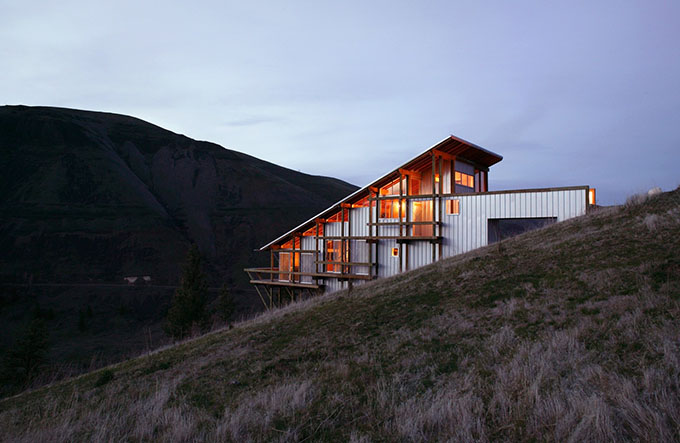 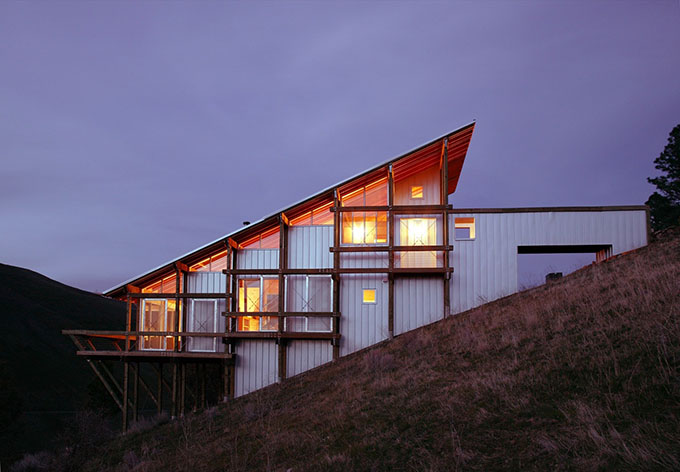 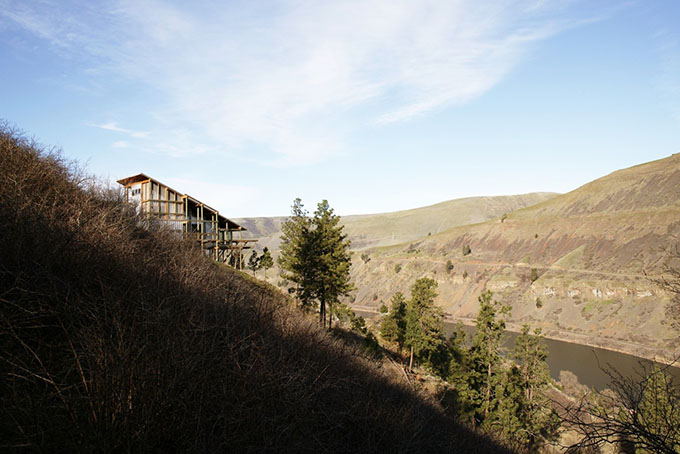 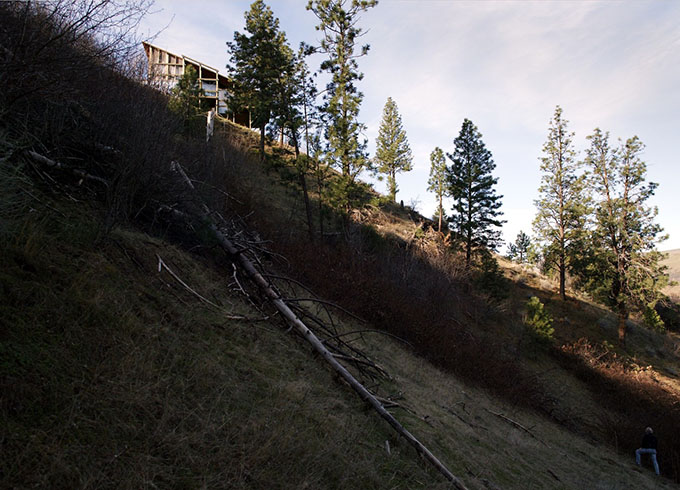 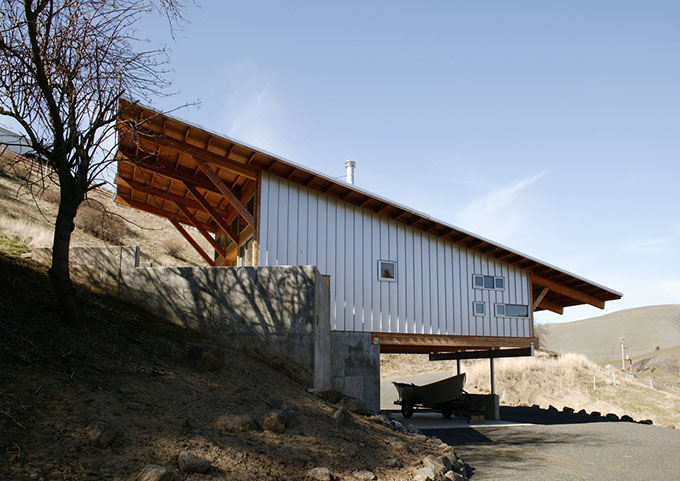 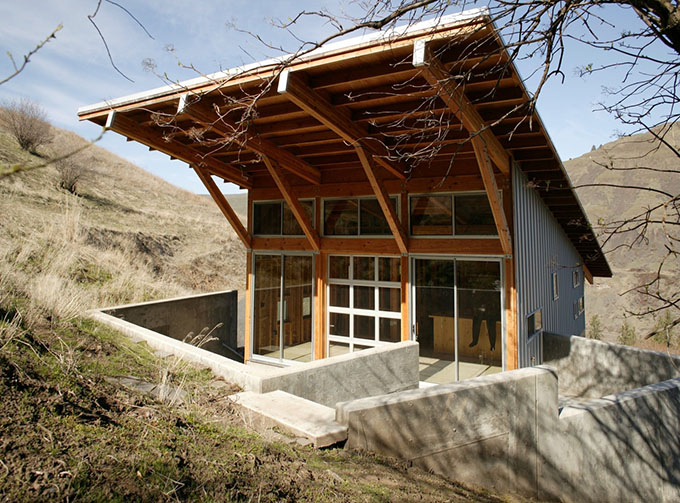 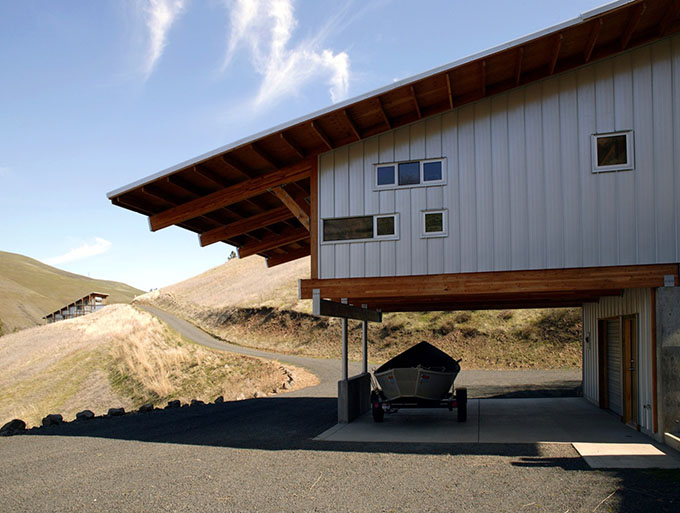 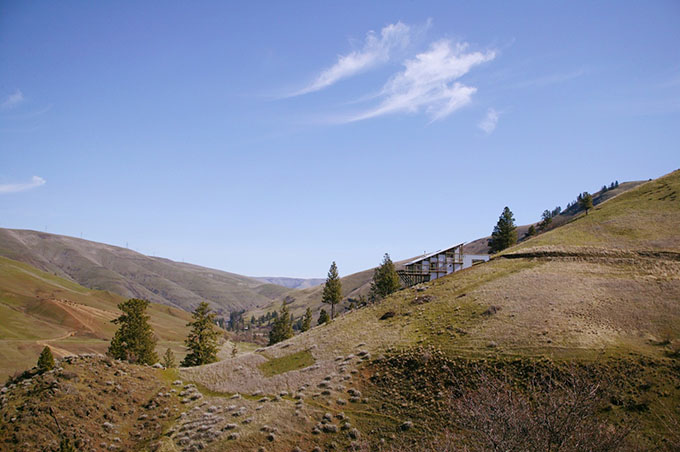 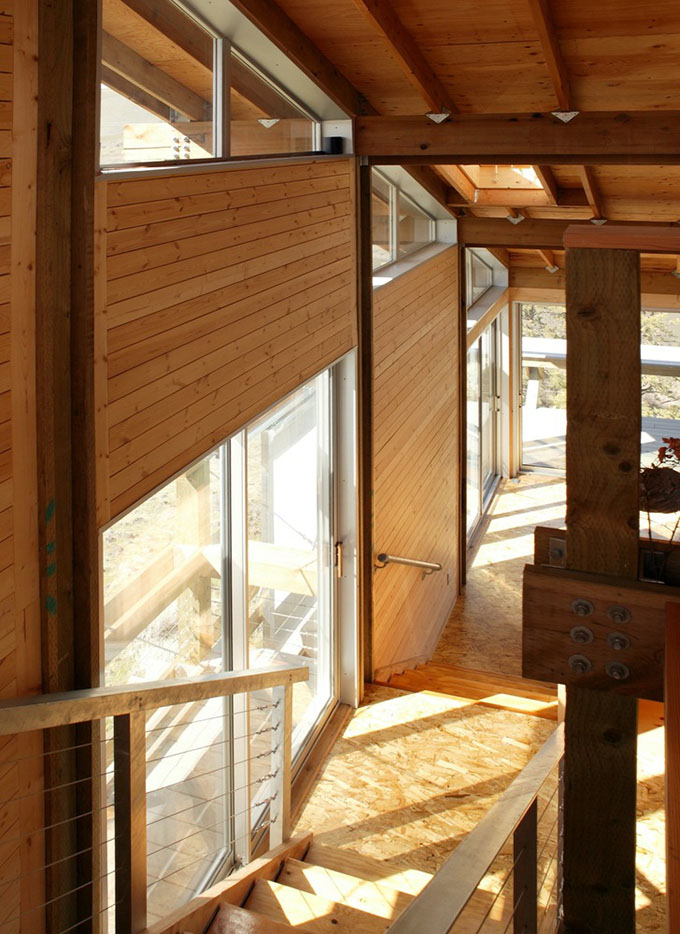 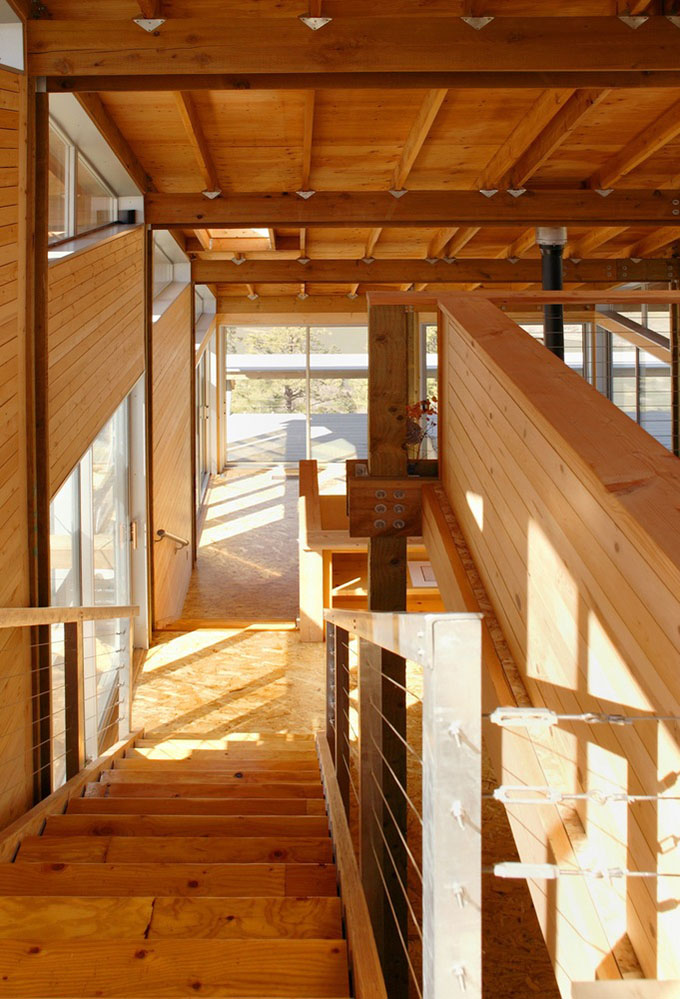 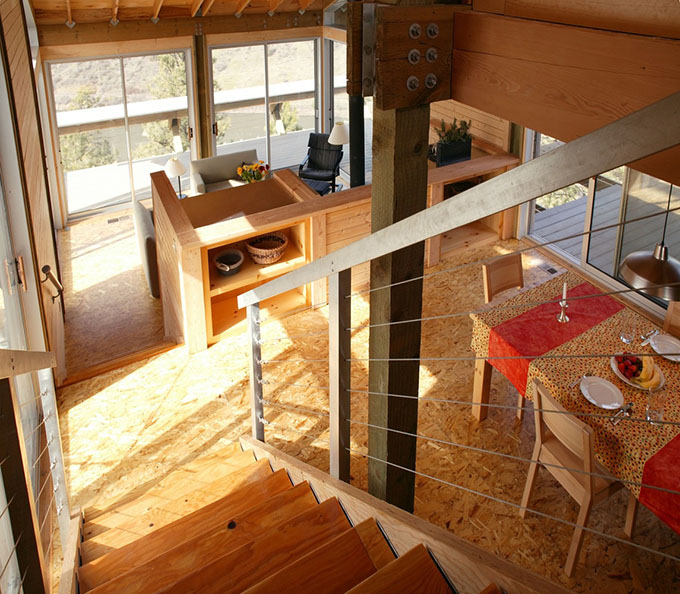 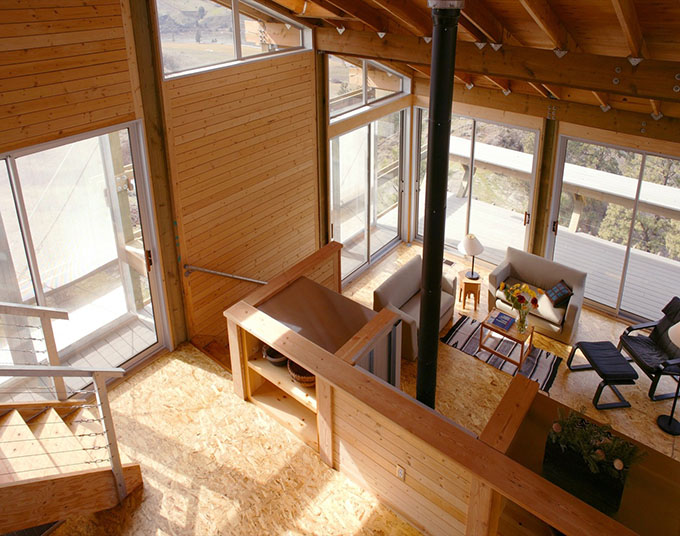 From the architects: The owners (Ken Campbell, a professor of veterinary Physiology at Washington State University and his spouse Jean Campbell, an attorney) wanted a year-round retreat “to cultivate the spiritual aspects in the trinity of human, fish, and river” (their words). A place to write, sleep, talk, eat, read, fish, cleanse, garden and wander……. away from their work in Pullman, Washington – 50 miles from the site. Also, they wanted a wilderness place for their grandchildren to visit.
Site: 40 acres on the southern side of the Clearwater River canyon – 10 miles upstream from Lewiston, Idaho.

Intentions: The retreat program was divided into two buildings: “the bunkhouse” is settled into a ravine along a seasonal stream and “the studio house” is perched on a finger ridge where a slope of bunch grass and Idaho fescue meet a Ponderosa Pine forest about 300 feet above the Clearwater River. The program was separated to encourage wanderings on the site and to create a triad of destinations…. the third destination is a perfectly shaped basalt knoll that provides a commanding observation point of the canyon. We resisted siting the house there, as it seemed appropriate to let it remain an “outside place”. The location of the studio house was determined by where you would have the best fish sighting. To use the owner’s words, “to mark the holding spot of steelhead for 200 yards in the fishy looking run along the river’s south bank”.

The form of the studio house is a simple rectangular box inserted into a moment resisting wooden frame. The frame and box follow the ridge slope and a bridge extension provides access to path that leads to the bunkhouse. The west side of the frame is a brise-soleil that provides access for window washing and support for removable perforated sliding panels- for shading and wind protection. On the east side, the frame supports decks and a screened porch with an outside shower. Strategically placed operable windows on all four sides of the studio house allow updraft ventilation as summer temperatures in the canyon often reach over 100 degrees. Transparency increases (amount of glass) as the building steps down the slope toward the river… in a sense, giving the illusion that it is “taking off” from the ridge. The “lines” of the studio house contrasts the 30% slope of the site that is mirrored by the strong roof incline with the orthogonal frame of strong verticals and horizontals (a distant derivative of some of the mining structures in the canyon).

Where the studio house is about exposure/transparency (windstorms often blast the canyon with 70mph gusts), the bunkhouse is a place to seek refuge. Tucked into the folds of a ravine about 300 yards away from the studio house, its east and west facades have small windows that frame views of microenvironments – a rock fall, a Hawthorne thicket, etc….. The south wall is entirely glazed and opens to a walled terrace built into the hillside with a stair that leads you up the ravine and out of the canyon. The north wall has an inclined “earth- sky window” for watching the soaring bird life and river below. 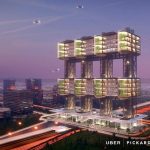 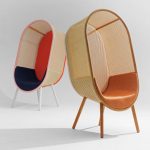