HerrmannsArchitects share with us their proposal design for a Community Center in a small village in the district of Mayen-Koblenz (Germany).

A long, rectangular plan summarizes the program together as a linear sequence of spaces. The open foyer is designed as a small marketplace. In this function the hard separation between inside and outside is repealed. The interior flows seamlessly into the outer space via the transparent facades. The hall tract was placed on the north side to avoid a overheating in the summer time. According to the user requirements the hall can be divided into 1/3 to 2/3. The roof configuration is also reflected in the ceiling and serves a better acoustics. Since all care areas are summarized consistently on the back side), the flexibility of the main rooms is increased.

By using the difference in height of the building site the west side articulated on two levels. Thus, administration, youth club and the rooms for community workers can be placed easily in a basement without a basement character is caused. Both levels, hall tract with catering and administration with the youth club are interconnected by a cantilevered staircase inside.
The different ceiling heights of the halls and the service areas are taken into account. The area with the highest folding marks the hall tract. Of special importance is the vertical structure of the façades of the building. Die view shows aware of an independent figure, which the building is given a recognizable identity, also to indicate that this object represents something special. – from HerrmannsArchitects For more of the project design continue after the jump: 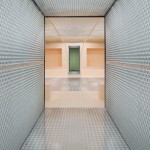 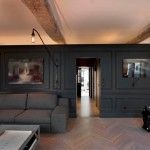