Jeju is an island formed by volcanic activities and celebration of its distinctive geological features was one of the main objectives of the brief. The design started from answering the brief which explicitly requested that the scheme to symbolise the volcanic landscape of Jeju consists of caves and mounds. We viewed these two geological feature in terms of their morphological formations – one as constructive space (volcanic mounds) and the other one as subtractive space (volcanic caves), and were represented in the formation of the massing of our scheme.

We also wanted the centre to be recognised as a ‘place’ rather than an ‘image’, a direct representation of volcanic forms, while its inspiration taken from the volcanic form is still recognisable. The roof of the scheme is formed by following the existing landscape and gently lifting up some areas of the site forming terraced pathways and viewing decks. Where the landform has been lifted, sunken terraces are formed to counter the action.  The overall circulation strategy is central to the place making which forms a knot creating crossings and loops in, out and around the roofscape, sunken terraces and the interior spaces. The seamless flow of people in and out of the building was central to the design of the scheme. This system of pedestrian pathways is also expanded out of the site and creates links between sporadic access points to the tracks in the mounds and the village’s road network, so that the centre not only works as a educational and touristic facility for visitors but also works as a place for the locals. 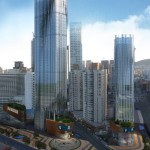