The composition of the project is a replica to the picture with grassy field provided by the client; it invented the name for the project, “FIBER-GRASS".  This theme also implied the extensive use of Sustainable Architecture everywhere in the design.   The woven grass fibers are interposed on the site and intersected by the already established vocabulary of IT buildings. The “conversation” launched between the two, forms a new construct which challenges the traditional approach in architecture- the platonic volumes are visualized by their fractions looking for completion of the arrangement together with the existing IT buildings. They become as prosthesis for each other- the linearity of the landscape, established by already constituted orthogonal system, is interrupted by a new one of the lately added buildings to reverse again in a different direction to the previous. The client’s program required the ground floor of the already designed IT-buildings instead of garage to be utilized as IT-office space of 19 000 sqm being incorporated with the new buildings of the competition site. It includes in addition a Residential Component of 17 000 sqm, a Commercial of 17 500 sqm, and an Institutional of 8 750 sqm.

The resulting design has site access through 2 security gates on the east side. Upon entry, the visitor is greeted by a 15-story hotel with a water feature at the drop-off area. The Convention Center is situated to the west of the hotel, followed by the 33-story service apartment’s tower. A Shopping Plaza with food courts lies beneath the Convention Center. This convenience serves the hotel guests, the convention attendees, the IT workers in the surrounding buildings, and the residents of the service tower.  It is a place which brings everybody together- visitors enjoying the place, those working in the IT-buildings and having lunch there, and those who live there with all the convenient facilities surrounding them. A water feature lies at the center of the Shopping Plaza which has a cooling effect in the summer, and it brings a feeling of peace and tranquility. A free standing elevator structure serves the 2 levels of the Shopping Plaza and the roof garden atop the convention center. These 3 levels extend to the Hotel, and they contain a bank, a gym, a restaurant and the before mentioned food court with a garden terrace, and an auditorium with a business center. Atop the Hotel is a bar/restaurant with an adjacent swimming pool and a view of the plaza and nearby lake.  The Shopping Plaza also extends the first 2 floors of the Residential Tower which are the core of the larger shopping facilities.  The 2 floors above it contain the Welfare and learning centers. The convention facilities lie at the same level of the hotel's auditorium rooms and the business center, providing an increased convenience for business visitors to the IT facilities. All units in the Service Apartment Tower have southeast and southwest exposure toward the nearby lake.  At the top of the tower are several penthouses with adjoining roof gardens.  On each floor near the elevators there is an area for socializing and an adjoining garden and facilities for children to play.  The open corridor on the tower's northeast side looks down toward the main plaza, juxtaposing the horizontal city with the verticality of the tower.
Sustainability is used as main source to create meaningful architecture without limiting it.  The concept is approached as the edifices are “sheltered” by green mechanisms – the buildings are screened from the sun exposure in one direction to open into another with different glass format responding to the IT buildings which cuts tremendously the HVAC costs.
The residential tower opens south giving to all apartments a healthy sun contact. At the same time the ultraviolet sun rises, during the hottest summer time, are blocked protecting the interior environment from overheating. Winter time when the sun is low, it reaches dipper indoors. There are several gardens on different floor levels which keeps the environment healthy. They filter the hot summer temperatures and redistribute cooler air to all unites of the tower. The hotel incorporates the green architecture too- a water feature facing south drops water from high level, cooling it through the process of falling to be brought inside of the hotel’s atrium. The atrium waves as a smock stack pulling up the dehumidified cooled air from below cooling down the building. As it picks speed, the air is pushed up as a “jet booster” through the roof making a wind propeller at the top of the building to rotate generating electricity needed for the hotel. The building is completely screened on the south, southeast and west sides working together with the three levels of garden at the top west side  together with the roof shading to block the hot afternoon sun. The roof of the convention center is divided on two- a part of it is covered with solar panels and the rest is a roof garden connected with the food court and the retail plaza below. The roofs of the higher IT buildings are used to put solar panels too and the rest of them have roof gardens as well. The energy created would be plenty enough for them to operate and the extra energy generated would be sold to the residential tower and the retail plaza. The entire composition is molded as self-sufficient “organism” where people work, live, relax, enjoy. It is a place which has everything to rely on itself protected from overheating and generating all the necessary power to be able to function in any aspect. Sustainability and architecture work hand by hand- one of them helps to generate the other and vice-versa. 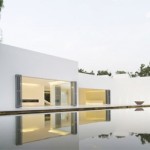 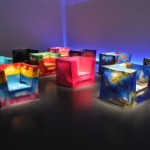