Here is another creative competition entry for the Bulgarian Collider Activity Center located in Sofia coming from a team of architects, Ignacio Gias, Jesús Lorenzo Garvín, and Ana Vida or simply Fissure Team. Climbing is about discovering, about exploring the environment, and searching new ways of understanding your physical context. When we first analyzed the project environment, on one side is a natural territory with no sign of human life except for some plants, which express the aim of people exploring their context. (They have been created with no planification the result of the continuous movement of anonymious people across the year following uncertain direction). This is the attitude Walltropia users search for in life, to explore and discover the unknown places in order to fully experience them. As a climbing wall, the artificial realization and construction of a natural environment should limit or transition between an urban context to a natural one. In order to express this bipolarity, the building acquires a rigid, geometrical and massive character, that by the use of a grid pattern, pretends to represent the human world, the city, the knowledge and the stability. In architectural terms, the building’s central space, the soul, is the climbing area. The building functions around the central core. This climbing area is also the exterior image of the project and consists of a 19 m high wall, which is naturally lit by the glass facade. The climbing area divides the building in two. The west side contains the public programs, such as Spa, Fitness, Funtopia, Coffee shop or the multifuntional Hall. The other side, the east, houses the daily functions, such as offices, parking and restaurant. All the programs have permanent visual connections to the climbing hall across the climbing wall.

The exterior skin is a prefabricated metal that allows natural light to filter into the building. In order control the luminosity, a vertical garden its placed between the skin and the building. The vegetation acts as natural shading to various parts of the building. 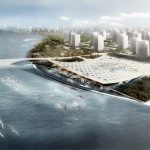 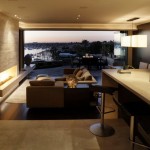