Miriam Barrio Studio designed this inspiring mid-century apartment  located in Barcelona, Spain, in 2017. Take a look at the complete story after the jump.

From the architect: The first challenge was to transform an old gloomy floor into a bright house. The change of distribution and the new orientation of the common areas that now cross the entire floor, allows light to cross from one end to the other. The blank spaces such as the passage areas and the halls flow through the house invading each corner with light.

Throughout the entire floor, golden details have been played on elements such as lamps, furniture and decoration. These details provide a luxurious touch that combines perfectly with the use of intense and unusual colors, which have been applied in a very resounding way in bedrooms, bathrooms and kitchen.

In case of the kitchen of colour blue night, which interrupts and at the same time contrasts drastically with the white room of more classic style.

In the bedrooms and bathrooms, it has also continued to provide each room with its character and personality thanks to the bright colors, which coexist with the other black and gold elements and make the experience in this apartment unrepeatable. 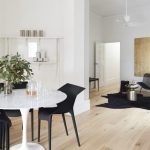 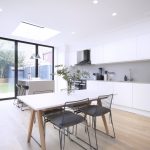