Hacker Architects has recently completed the renovated project of the  Salem Public Library . Originally built in the 1970s, the 96,000-square-foot library was due for a renovation to bring its structural resilience and building systems up to modern standards. When funding came through for seismic renovation, accessibility improvements and life-safety updates, the city and library saw a rare chance to address some of the additional challenges encountered by staff and library patrons in their aging concrete building and outdated spaces.

With almost no wiggle room in a utilitarian budget, the Hacker design team needed to get creative finding ways to make every dollar spent do double-duty. Each aspect of the design is filtered through a practical lens of how each choice can contribute to improved seismic and life safety, from shelving and furniture to circulation, visibility, and new points of entry. The design brings daylight into the core of the large, fortress-like building, transforming an inward-facing brutalist-era building into a bright, voluminous space that invites the community in. To create a more pleasant, cohesive library experience for patrons, the design also reimagines how different spaces with different functions relate to one another.

A vision was formed to create a facility that is welcome, safe, and flexible while enhancing a connection between people and their community through a close cooperation with the library team. The brutalist-era building’s interior is illuminated by natural light, turning it from an inward-facing structure into a spacious, bright area that welcomes the neighborhood. The expansive center space enables vertical linkages between floors, while new windows and altered entrances connect the outside and inside.

The design reimagines how distinct spaces with different roles connect to one another – staff spaces vs. public spaces, the demands of library sections serving different age groups, quiet zones, noisy zones, and high-traffic areas – to create a more pleasant, coherent library experience for users. For increased usefulness and efficiency, the library staff and back of house areas have been moved to the lower floor. The upper two levels are primarily where you’ll find busy public areas. The youth services, which were previously spread across several floors, have been moved to the top level to allow for better resource sharing, improved operations, and greater collection clarity. The Teen Scene and Children’s areas now have vibrant new spaces, and the Discovery Room has been moved to Children’s. 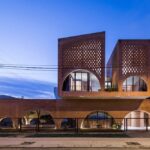 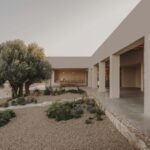