Studio Daniel Libeskind has just unveiled the design for a Residential Building in Berlin that, upon completion in 2015, it is expected to brighten the already rising neighborhood of Chausseestrasse. Studio Daniel Libeskind has just unveiled the design for a residential building in Berlin that, upon completion in 2015, is expected to brighten the already emerging neighborhood of Chausseestrasse. With large angular windows designed to catch maximum light, canted walls, and a metallic-coated ceramic façade, the 107,000 sq. ft. (10,000 m2) Chausseestrasse 43 occupies the corner of a block in central Berlin. Says the architect: “Even as my studio is often called upon to design skyscrapers these days, I continue to love to build homes, the basic unit of human life.” In this case, Libeskind is adding a dash brightness and transparency to a key spot in Berlin, one that also happens to be located directly opposite the headquarters of Germany’s Federal Intelligence Service. Daniel Libeskind’s challenge was to create 73 desirable one- to four-bedroom apartments on a more or less rectangular plot a little less than half an acre (16,000 sq. ft.), accommodating attractive retail on the ground floor, underground parking, and a common outdoor area. The architect achieved this and more. The dramatic coda is found at the top, where a penthouse apartment, perched on the prow of the building, embodies the ultimate in inside/outside urban living. Here, a double-height living room is lined on one side by a sloping wall of obliquely shaped windows, which leads out to a patio overlooking Berlin. A floating stairway ascends to an open-plan living area, bedrooms are tucked into the rear, and the ceiling sweeps up to a height of ­21 feet. The façade cladding is an innovative three-dimensional stoneware tile that Libeskind designed with the Italian company Casalgrande Padana. The geometric ceramic panels not only create an expressive metallic pattern, but they possess surprising sustainable properties such as air purification and they are self-cleaning. This cathedral for modern living occupies a piece of land where the Wulffersche iron factory once operated before being expropriated from its Jewish owners during World War II. The Berlin-based real estate developer, MINERVA, is handling the technical and economic implementation of Chausseestrasse 43 in partnership with the Berlin-based property developer, econcept. The 20-year-old MINERVA specializes in real estate development for commercial and residential projects, such as the contemporary Alexander Parkside apartment and hotel complex that recently opened in Berlin. Econcept specializes in the construction of new residential buildings, such as the Palais KolleBelle, a new residential complex in Berlin inspired by the architecture of 19th-century Paris. 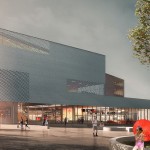 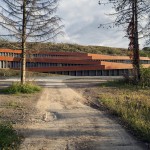