Take a tour of Tumblr Founder’s Brooklyn Apartment designed in a loft style by John Gachot. Tumblr’s David Karp invited New York Times for a visit to his Brooklyn home, along with photographer Ben Hoffmann who captured these eye-catching images of the young entrepreneur’s living space.

“Functionality” matters most, he says, and while he has enormous respect for Google, “no one at Google spends time thinking about how to make their office park ‘authentic.’ They want it to be awesome, with robots, driverless cars, that kind of stuff.” Another difference is that New York’s tech industry tends to work with, or on top of, what’s already there, whether physically or conceptually. “The West Coast thing is to destroy what came before,” while New York is “layering and working with what’s here already,” McLaughlin says, making reference to Rem Koolhaas’s seminal 1978 manifesto on urbanism, “Delirious New York.” – from New York Times

Karp’s apartment is located in Williamsburg, Brooklyn, see more of the space after the jump: 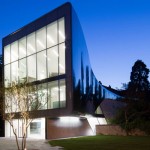 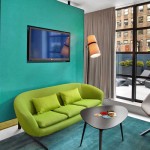