Stefano Belingardi Clusoni shares with us his design for the Mikado Tower. More info on the statistic principle and design concept of the project, you can find after the break. Statistic Principle
The static principle of the tower is based on the concept of Tensegrity, mechanical structure consisting of discrete and separate elements subjected to compressive forces and by continuous elements subjected to tensile stress. The structure is self-sustaining due to a state of tension self balanced present in the system. The tower is composed of rigid parts connected by flexible elements in tension, the latter consisting of wires in the outer perimeter of the building: the rigid components, represented instead by stairwells, elevators, services and facilities may not touch or support each other. Structure to be stabilized and be braced, requires structural rings on the base, on the crown and at 1:5 and 4:5 height of the tower. These structural rings become an entire floor for amenities that also allowed me to divide the functional program of the tower into 3 parts: public space, offices and residences. This static system takes the name of "hammer effect". A structure, assembled according to these principles, is in a state of pre-compression which makes it intrinsically stable, so that it is able to react to external forces and re-stabilise itself by changing the degree of compression of some elements: the stability is guaranteed by means of a mechanism that architect Richard Buckminster Fuller described as "continuous tension and local compression." Concept
The idea of the tower comes from the desire to reverse the "classic" principle of tower, replacing the solid central structure composed of the staircase, lifts and with a "void" from heaven to earth. This void is transformed into a light well allowing natural ventilation inside the tower with chimney effect. The bearing inclined circulation elements that revolve around this void allow me to get close to the design concept of the Eiffel Tower. 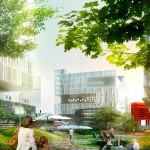 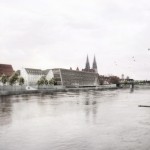