A group of ambitious architects is getting ready to build a Lord Of The Rings City, the mystical Minas Tirith. Deemed possible by the daring group, the project cost is calculated to cost almost 3 billion dollars or £1,85. We are an ambitious team of architects and structural engineers who are passionate about creating a beautiful, inspirational and fully-functioning replica of Peter Jackson’s depiction of Minas Tirith, as seen in his Lord of the Rings films. We all share a love of Tolkien’s work, and a desire to challenge the common perception of community and architecture. We believe that, in realising Minas Tirith, we can create not only the most remarkable tourist attraction on the planet, but also a wonderfully unique place to live and work. We aim to create both residential and commercial properties, allowing for sustainable growth and a high quality of life. To make this dream come true the architects calculated the above budget, which will count for the building costs, acquisition of the land, employing builders and the material. They are no doubt ambitions, and if in the next 60 days they do collect the money they aim to start working on the project already by the end of 2016. The city would rise on a one of two locations in England, however in case they do not raise the required funds none of the pledges will be charged. The name Minas Tirith means “The Tower of Guard” or “The Tower of Watch” in the Elvish language Sindarin. It was originally named Minas Anor, “The Tower of the Setting Sun”, in connection with Minas Ithil, “The Tower of the Rising Moon”. Minas Ithil was later conquered by orcs from Mordor and was renamed Minas Morgul, “The Tower of Black Sorcery”. Minas Tirith was built culminating in the Citadel at the summit. Each of the seven levels stood 100 ft (30 m) higher than the one below it, each surrounded by a white wall, with the exception of the wall of the First Circle, which was black. The outer face of this outer wall, the lowest, was made of black stone, the same material used in Orthanc; it was vulnerable only to earthquakes capable of rending the ground where it stood. Each wall held a gate, and each gate faced a different direction. – from WIKI

How can you help them? Donate through their INDIEGOGO page and become part of history, or at least you tried helping a dream come true. 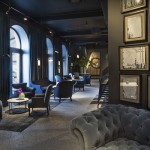