From the port to the arts. The opera­ house will be situated on the man-made island in the middle of the port territory amidst barges, containers, warehouses and industrial premises. This development is among the first steps of a complex transformation of this district – transformation of an international port into a world cultural and tourist center. This adds extra meaning to the opera house: on the one hand a building of such cultural and tourist object should have enough symbolic potential and on the other hand – it should not lead to the situation when the previous history of the place has been disregarded as it often happens due to rapid development of the modern megapolises. In other words as an architectural icon the future opera house should combine irresistible attractiveness and expressiveness of a real work of art and also the brutish and severe functionality characteristic of the port surroundings. So how is it possible to unite such contradictive characters into one?

Actually “the art of opera” in its architectural and artistic sense resembles a fine connection between techne and ars. Modern opera as a building is more like a machine filled with scenery technology and equipment. In its turn “opera” as a genre of scenic art goes back to the meaning of “labor”, “activity”, “exertion” (meaning of the word “opera” in Latin). “Opera House in Making” is aimed to exhibit such qualities in harmonic coordination with the existing environment, natural and urban. General plan and public space. Planning of the plot for future construction was carried out with distribution of future transport flow in mind. It is assumed that the man made island with opera house will be surrounded by extensive transport connections: railway and sea port, boat berths and also monorail along the shore. Transport connections in combination with pedestrian and car bridges provide the main inflow of the visitors to the opera house.

The key connection between the city coastline of the city and construction plot is the pedestrian bridge leading to the center of the plot. The project assumes to extend this bridge through the whole island providing a unique continuous pedestrian connection between the city park, island, opera house and ocean. The bridge will consist of two decks: the upper deck leading to the main entrance of the opera house and the lower deck – leading to the wharf underneath the opera building. Thus when a visitor approaches the bridge he can choose to enter either the building hall (mark 16.800) or stay outside and enjoy the open space.

The pedestrian-transport bridge on the north will provide staff access and load in area to the opera house.

Such configuration of the plot allows for a variety of public spaces around opera house and the rest of the city. Thus the bridge line connecting the city park, opera house and ocean creates a  loop where shows, processions, ritual celebrations and street festivities can take place. Directly underneath the opera house is a small amphitheatre that will be gradually elevated to form the shape of a hill. Protected from bad weather this place will also serve as an additional scenic space connected in one whole with the help of sound, light and video installation. The remaining space around the opera house will be accessible to the general public.

In addition to the essential landscape and design elements (sand man-made walking road along the shore, stone paving) we do not consider necessary to overwhelm the landscape around the opera with park areas (which are abundant in the city park by the shore). Light crown on island. Front surface of the building should be developed considering the diversity of its inner layout structure, which as a result will lead to the reducing of volume perception. Just because of this the façade should provide, first of all, the unity of the form. The opera house projects assumes double façade covering: the upper layer is done by the narrow vertical panels with a couple of  crooked outlines. The extent of the closeness / openness of the panels can be regulated depending of the daytime, weather conditions and particular functionality of each of the premises. By changing the angle these external scale will influence the color saturation and measure of façade lighting by turning its perception into the fascinating and self-sufficient process.

By hiding hard framework panels give smoothness and softness to the building and even the effect of vanishing of the building in the panorama.

The laconism of the silhouette brings the necessary level of symbolism. And will provide the recognizability of the building s a symbol of the city and country in general.

At the end with help of architecture tool the opera-machine has all the chances to turn into one more landscape masterpiece, eternal sight background even to the local mountains and islands. Classic and/vs Modern. The zoning of the plot oriented to the priority of creating public space also became decisive at determination of the dimension configuration of the building. The central pedestrian connection as if cutting the plot in two parts leads to the distribution of construction area in two parts – bigger and smaller according to the requirements of the program. Opera house consists of two pyramid looking dimensions, which at crossing with each other create central space of the hall. The hall is organized as a big multiple light space. Security, info-center, cloakrooms, specialized stores, cafeterias on different levels and big restaurants on the mark 37.800 create conditions for service and comfort necessary for such class of the building. Hall – is a cultural nucleus, which is the center of connection between the city, art and nature.

The bigger dimension located at the northern part of the plot and sides transport and pedestrian axes, which allows free access for the service and specialized transport. This part of the building is shaped first of all by the configuration of the hall for classic opera staging (1816 spectators). The hall has a traditional layout with strict division for stage and audience and also special chambers and service premises adapted for stage equipment. On the lower level of the northern wing under the stage pockets warehouses and files are situated. On the levels from 16.800 to 25.200 the make-up rooms and rehearsal rooms for actors are situated and also premises for service staff. Higher on the level 29.400 administrative and office premises are located. The offer includes possibility of location of children’s ballet studio in the building on the mark 42.000 which has visual connection with big rehearsal hall situated on mark 33.600. The upper level as the most lighted is taken by artistic studios. Studios have direct connection with gridiron situated right under them. For comfort and productivity of the work the studios have entrance for the open terrace.

The smaller dimension includes universal hall for modern performances (924 spectators). Its layout differs with extreme flexibility: the hall can be easily adjusted for performances, symphonic concerts, contemporary dance and defile. The distinctive feature of the layout is absence of the back wall of the building: if necessary this barrier can be “taken away” which will significantly wider performance and show possibilities by providing possibility to continue their actions behind the limits of the building.

By analogue with the classic one the bottom of the modern dimension is taken by the service and warehouse premises, the top is taken by the rehearsal rooms for professionals. Also on the mark 42.000 the small hall is planned for specialized chamber events (300 spectators).

Apart from central hall on the crossing of the bridge with the building the opera house also includes two entrance groups. From the southern side of the building there is a two lights hall (the height is 8,4 meters), free layout of the elongate premises and area in front of the entrance allows to use it for organization of the exhibitions of modern art.

The entrance group on the northern side of the opera house is dedicated to the VIP visitors and is done with the maximal convenience for the cars access. Those who enter find themselves on the special travellator, which leads them to the central hall by cutting through the whole lower part of the northern wing. The see-through fragments of the tunnel make it possible to see the inner engineer device of the opera-machine as a rule hidden from the eye of the spectator. Thus the visitors are welcome to have a look on the staging process from the other side, to comprehend and evaluate the difficulty and high technology of the “Opera House in Making”.

Despite the visible voluminosity the building still remains open and attentive to the needs of every particular visitor. On the corners of the northern and southern parts there are elevators providing access for the opera house personnel. Closer to the hall there are stairs and elevator knots providing entrance for the people with physical defects directly from the level of theatre venue; on the other hand the inner stairs are done considering all fire and evacuation norms. On the mark 4.200 the side spaces of the “modern” dimension are dedicated for the conference-halls which can be rented out and have possibility of the self loading via northern and southern entrance groups. It is necessary to add that we refused to organize additional connections between “classical” and “modern” parts of the building. Such isolation of the classical opera and modern performances in separate dimensions allows optimizing distribution of spectator streams and servicing of the building in the situation of managing simultaneous performances. 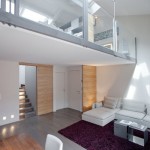