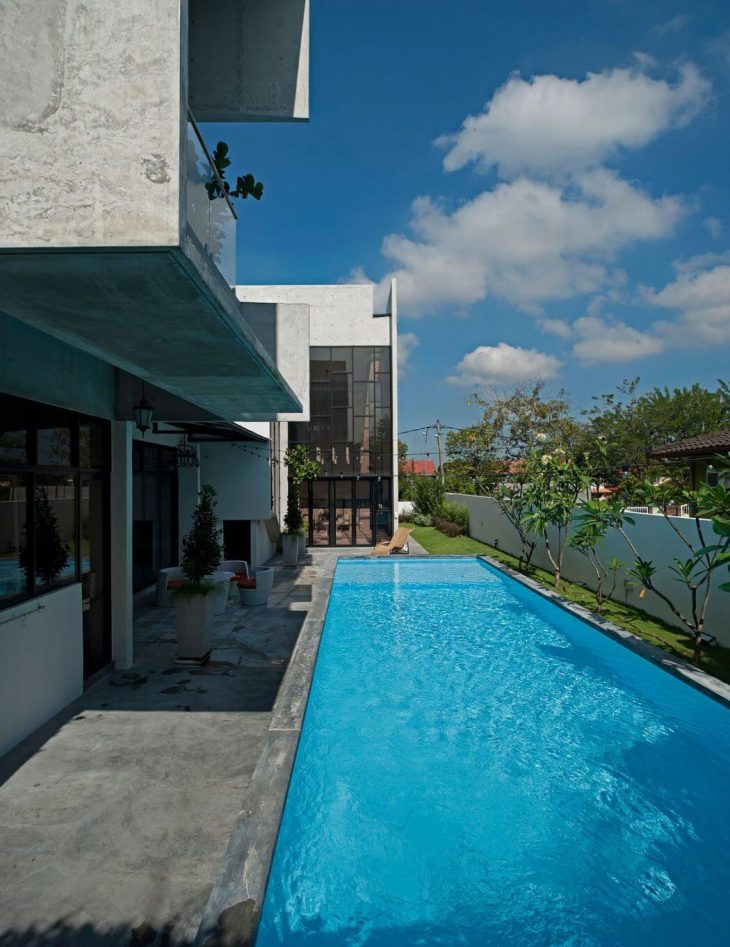 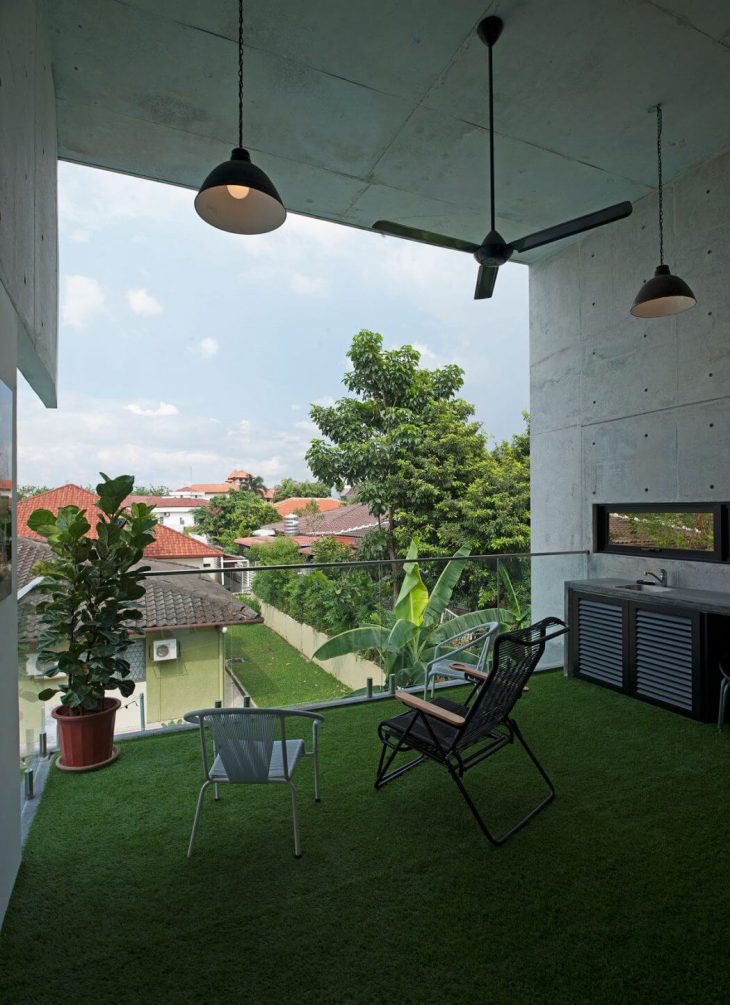 From the architects: A new built, 4600 sqft built up bungalow on an apprx 7400 sqft land in SS3, one of the bigger residential suburbs of Petaling Jaya.

I had received an email inquiry from the client stating they needed a family home built and were looking for someone to work with them “fanatically” to make it happen ASAP. Oh, and on top of that, they also have a fairly limited budget! – Not exactly the right mix of terms any consultant would jump up to grab…. but I thought what the heck, let’s just meet up with them. I did and we surprisingly hit it off!

The clients were involved in the building industry and already had an idea of what they wanted. They were particulaly interested in the current trend of the raw, industrial aesthetic which was popular among younger architects in Malaysia.

Although I can appreciate that aesthetic (which I felt was getting to be a tad bit overdone!!), I felt that for that look and feel to permeate all throughout a home may not be the best, especially for a home with children. Instead I proposed that we do a mix; we have some features using fairface concrete/ cement screed/ plaster and bricks but balanced off with “finished” elements as well – this would give the house more layers and contrasts and thus have more character

They were also very into all things vintage and had quite an eclectic collection of old furniture, lights, artwork and other assortments. We thought this would all work rather well to come together amd create a very rich and unique home.

The clients had also already prepared a very thorough brief ( it was a powerpoint presentation!!!!) stating the spaces they require and complete with some images of what they like.

As with all our other residential projects we always start with at least one option (with some variables) of what the client wants – the wish list. And we also add another option (or options) of what we think could work instead based on how we intepret the brief. In the end, its usually a hybrid of options, working on various strengths to come up with something just right.

The site didn’t pose any real problem as it was quite large and flat with no real major tree or vegetation to retain. There was an existing single storey bungalow on site which we demolished entirely. So basically, its was like a blank page with no site constraints. The main planning and orientation of the house was pretty much determined by the entrance and sun orientation: the pool and the public spaces of the house would face East, to get the morning sun. The other constraint /requirement was of course Feng Shui. Once we had a pretty workable layout, the clients had to consult their Feng Shui consultant and we made a few tweaks (thankfully it wasn’t major!) to comply to the geomancy requirements.

We like to think we’re very good at space planning and especially good at making small spaces look larger than they actually are. That’s one of the principles we always try to adhere to – to have the minimum footprint as possible for the home while meeting all the space requirements. One of the tricks to make spaces look bigger is managing and maintaining the ‘line of sight’. We always try to enable the users to look from one space into the next and beyond. That’s why we always encourage double volume spaces and mezzanines- It enables all the levels of the house to interact visually with one another. Especially with homes with children; its always useful as you can always watch them wherever they are and shout at/for them! – no excuse for them not hearing you!

Playing with high volumes also gives another dimension to the space and combined with an open horizontal light of sight – like the open view to the pool from all the main spaces of the ground floor – it makes the user experience the entire house as a much larger space than it actually is. Of course the larger volumes also bring other benefits such as increased natural lighting and the ability to allow more cross ventilation. Given a choice, we would have preferred that most of the spaces are left just fully naturally ventilated, but with the annual occurrence of the haze in this part of the world in the recent years, this doesn’t seem feasible any more – the house has to be fully sealed when the need arises.

For the overall external outlook – the clients did want something very visible and iconic. They also were very taken by the aesthetic of fairfaced concrete. So the main double volume living space was done entirely in free form fairfaced concrete as the main feature for the entrance of the house. – this would be complemented by a horizontal screen that would wrap round the master bathroom. We actually went throught countless of options for this screen! – from steel, to concrete blocks to green walls till we finally settled on a simple screen of vertical cement board strips on a steel frame (wich also hid the front aircon outdoor units).

The other main fairfaced concrete feature was the visually cantilevered entertainment block/ lanai on the first floor which overlooked the pool. Originally intended as a closed up space, it was finally left as a semi open area. We intentionally didn’t close it up as a full 4 sided “box” and left a side of it broken for visual articulation.

We would have loved to have built the entire first floor entirely of fairfaced concrete – as a floating concrete box, but budget contraints forced us to be very selective of which areas were to be treated as features, so we built the other areas as plastered brickwalls.

For the interior base finishes, we didn’t want to go too industrial as the exterior was already quite raw, so we had a more “finished” look. The common corridors (including the dining and dry kitchen) at the ground floor and first floor were left as cement screeding with aluminium inlays for breaks, as a budget consideration. The living room was done in broken Ipoh white marble – a throwback to traditional flooring which was very popular in Malaysia, in the 60’s and 70’s. The bedrooms were all finished in LEEDs certitied, luxury vinyl tiles which had a timber grain look and feel.

The built-ins were all custom designed by us. We had some industrial quirks on them like the steel framed structure for the kitchen island and cement board panelling (and secret doors) at the dry kithcen. The master wardrobe and ground floor study had steel frame construction with shelving. The clients also sourced some retro items like the vintage sewing machine which we incorporated into the power room vanity, and precast terrrazo bathtubs, basins and pots from Bali, which we also included into the designs. These, mixed with some retro tile selections gave a very distinct, eclectic flavour to the bathrooms. We also sourced some printed cement enclaustic tiles from Singapore (Hafary tiles) which were used for effect along the terrace/ apron facing the pool.

At the first floor entertainment terrace/lanai and “play room”, we used collapsible grills reminscent of the old shop houses to divide the 2 spaces. This area is actually the man of the house’s “mancave” or “den” of sorts! When the “lads” are out drinking on the lanai, the collapsible grill can be opened up into the “play room” which is actually a home theatre space. There is a pull down projector screen and the lads can watch football, etc from the comfort of the open lanai space!

The client also found an interesting solid timber table set which came with a pair of head chairs with extremely high back rests! Not the most stable of chairs but they really look good in the double volume dining space! The Vibia “inspired” wire framed pendant light above (also sourced by the client) completes the look!

The clients had been running about shopping and sourcing for the loose furniture pieces and accessories for the house on their own. During the selection process we would then be consulted to test whether the size is correct or suits the space for the major items before the clients makes the purchase. For others, we’ll just work around what they had purchased and figure out how to use them. Sometimes we need to modify or add on to the items purchased to make them usable (like the sewing machine vanity!).

All in all, it was a fairly enjoyable process I think for both us and the clients. The clients were heavily involved in the design and we actually encourage that as the house then really becomes an extension and reflection of their personalities as well. 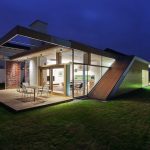 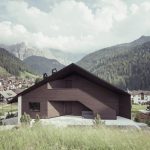