The canal seen from the bridge appears as a uniform expanse in which the water, swallowed up, makes space for the foliage of the trees that caress the surface of the water. The green is not really on the water, but in it. You can see the reeds, the gardens and the poppies breaking through, and you can glimpse simple gestures of daily life.

If, urged by curiosity, you were to go and visit one of those places, it would seem to you as though you are resting in a softened space, far from the frenzy of the city and the shuffling of tourists, far from the souvenir stalls and the cruise ships. It would seem to you to be present in a room enveloped by tree-lined walls and looking at the city’s buildings and at the sky – most of all at the sky – as through from a cradle. Once you leave the canal you would notice that on the water, life is characterised by slow motion: rowing boats ferrying people from one bank to the other, green rooms floating on the water, and more glimpses from afar, little artisan workshops that follow their skilled workers of time ago, but gliding along the water.

You rest on the bridge and you ask yourself if you are in a surreal place, like in one of those many parallel worlds described in science fiction books. Instead you are in Venice. You are still walking along those stones consumed by time, along the walls that ooze water, underneath those sumptuously decorated windows that tell of past glories.

Simply, water is not just water, and the city has stopped fighting against it to make out a pocket handkerchief plot for itself on which to erect domes, turrets and charming chimneys as though jutting out always higher to escape from that which crowds its streets. The city is mirrored in and takes refuge in the water. It’s as though you can see a new part of Venice that lives in its reflection, a sort of third level from which to admire the city from below. But if you look from the paving on the bank, the scenery on the water does not seem to have changed; the new part of Venice is as though hidden in itself.

The concept develops around this thought and from the intention to build new scenarios of dwelling in the city, discovering a third level, that in balance between the water and the seabed. Rooms open towards the sky that float and move on the water. Rooms from which you can observe Venice from below, as if from a cradle, safe from the din coming from the canal banks. Rooms in which to carry out a part of everyday life. Rooms in which to find shelter under a tree, rooms in which to cultivate – not only your dreams.

As Seen on Bustler 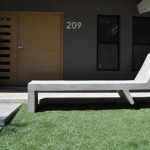 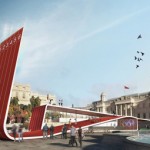