For more info continue after the jump:

NEW YORK AND LONDON – NACO, its Saudi Arabian branch SADECO and global architect HOK have been awarded the contract to design the expansion of King Khaled International Airport (KKIA) in Riyadh, Saudi Arabia. NACO, Netherlands Airport Consultants, a Royal HaskoningDHV company, and HOK will lead the design team for this prestigious project.

The consortium of NACO, SADECO and HOK will design the expansion of the existing terminals 3 and 4, which will enable the airport to handle 20-25 million passengers per year. Currently, the 30-year-old airport is handling approximately 15 million passengers annually. The expansion project will allow KKIA to meet the country’s economic growth of more than 5 percent per year. Total project costs are expected to be approximately US$ 800 million, with the expansion scheduled to be complete in 2015.

Design Team
NACO has been involved with the KKIA airport’s development since 2007 through various master planning and design projects. HOK was the original designer of the existing terminal complex nearly 30 years ago.

The team has worked together before and offers extensive expertise in the successful delivery of complex, high-profile airport projects such as the Beijing New International Airport. The Saudi General Authority of Civil Aviation (GACA) and KKIA will benefit from the best resources this team has to offer, including 40 years of experience in the Kingdom of Saudi Arabia.

Kjell Kloosterziel, director airport planning & building design at NACO and project director for the project said, “This challenging project keeps us involved in a critical component of the airport’s development program aimed at increasing capacity while at the same time elevating passenger experience to a world-class level.”

Richard Gammon, senior vice president, director of Aviation + Transportation at HOK said, “HOK’s aviation and transportation team has a global track record of delivering some of the world’s largest and most complex aviation and transportation facilities. We’re delighted to be working with the team at NACO, and it’s exciting for us to return to Riyadh. The expansion of terminals 3 and 4 will be vital in allowing the airport to meet increasing demand and support the country’s growing economy.” 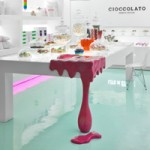