Designer Filip Kurzewski shares with us his project design for the Phoenix Complex. The Phoenix represents rebirth and renewal. This astonishing project design becomes a stimulus for its surrounding and serves as an example of human-nature symbiosis. This concept allows people to live a healthy, fruitful lives rather than in squalor.

We all hope to see a better future city, which is  “green” environmentally-friendly and favorable to it's inhabitants. The recycling of waste generated by the city, is the key to achieve this goal.  New recycling centers will  be  needed as well as recycled water systems..

Solving these ecological issues will result a in cleaner environment. Today, potable water, in which fish can live, as well as water used for leisure and industry, is on the verge of collapse.

A new ecological form must evolve. The Phoenix Project is the concept of a living structure “rising” form the ashes of a dead city.. The Phoenix represents rebirth and renewal. The Phoenix Project becomes a stimulus for its surrounding and serves as an example of human-nature symbiosis. This concept allows people to live a healthy, fruitful lives rather than in squalor.

The design of the Phoenix appears to be arbitrary. It is not. It is thought to be an image of “rebirth” and serves as a stimulus for a new way of thinking and design for the New City.

This hybrid “gives life” to space and performs a creative function. It also enables a new healthy existence incorporating environmentally friendly solutions. The Phoenix building stands as a “framework” for the city -”The Beginning”, whose function is to create the city. The complex handles the nascent city by embracing museums, art galleries, a theatre, cinemas, malls, offices, hotel and a park.

The Phoenix goes across a river and creates an energy-generating dam. River water also gets filtered, supplying households as well as the two lakes “shaped” by the building which can breed healthy fish. The water which comes from two reservoirs is also used to water greenhouses, which constitute a part of the building.

Some crops are located outside the building near a hydrobotanic sewage treatment plant. The number of crops increases or decreases – depending on the city’s development (i.e. the number of inhabitants). From the highest point in the complex, all city’s inhabitants and visitors can see the crops and a valley. Consider the building surrounded by agricultural fields which are part of the overall Phoenix design. The fields change with time and create the impression as if the building (Phoenix) as a living object which embraces households within these “wings”.

If you look at a sequence of aerial pictures taken from various stages of the Phoenix, you can notice the movement of wings. The building comes to life. The mythical phoenix will always be there for future generations – the place in which the city was born. The Phoenix serves as a symbol for rebirth and a new quality of life. Concept is a response to this urban rebirth. It is a symbolic metaphor for a more rich and humane living environment. 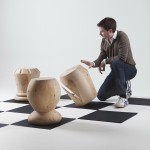 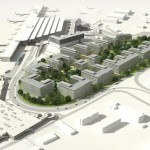