Degli Esposti Architetti teamed up with Eisenman Architects and AZstudio to design this stunning residential building in Milan, Italy. Take a look at the complete story after the jump.

From the architects: For a triangular site included in the Piano Pavia-Masera (1909-1911), bounded by buildings built from the beginning of the 20th century to the Seventies, this project seeks to create a distinctly contemporary apartment building, while discussing both architecture ideas and the context, presenting itself as a current milestone in a genealogy of the Milanese house. First of all, this building solves the issue of the street relationship, without a construction along the boundaries of the block, like three exceptional precedents: the Ca’ Brütta, the Casa Rustici, and the Corso Italia Complex.

The S-form of the building was determined through a series of studies seen in diagrams that show how it meets both program and zoning requirements and also incorporates an early 20th-century classicist building on the site. This building becomes part of the residential complex, as well as being its formal entrance. The public garden Ramelli to the west now ends in the curve of the new building’s west elevation. In addition, the open form of the building is based on the determination that any continuity of the construction along the boundaries of the block would have established an excessively small and dark courtyard, and views overlooking that space that would not have been effectively resolved.

Restricted by the height limit of the local regulations, the building is constituted of a series of horizontal bands stacked with slight offsets that create four different layers in the nine-story body. The first three floors constitute a base layer similar to ordinary urban palazzi with travertine cladding and punched window openings of similar size, with inset balconies. The fourth floor, or second layer, is a piano nobile which is set back from both the façade of the travertine base and the marble façade above, and its glazing contrasts with the stone surfaces.

The third layer, floors five and six, is articulated by enameled metal frames that create a horizontal band of golden rectangles running the length of the façade. The fourth and topmost layer, floors seven through nine, is not only a horizontal layer but, in its stepped profile and volumetric mass, is also a series of “urban villas” with large planting terraces.

In addition to the above-mentioned considerations regarding the relationship with the urban fabric and the stratification of the four layers of construction, the composition is the result of two further operations. The frames that characterize the fifth and sixth floors, and a giant order that embraces floors five to nine, are set forward of the actual west façade of the building. In doing so, they provide space for balconies. On the east façade, the same shift excavates the mass of the building in a carved lattice. The second operation is that the whole ensemble of floors five to nine is slightly shifted off center, producing a dynamic effect and having each transversal section of the building be unique and all of them different from each other.

The structure of the building is mixed, in reinforced concrete for the load-bearing elements and metal for the frames from the fifth to the ninth floors. The foundation plate and underground waterproof retaining walls form a basin of reinforced concrete without solutions of continuity. The load-bearing structure of the building (pillars, stairs-elevator bodies) is a reinforced concrete frame with solid floors, reducing their thickness. The structure of the metal frames on the fifth to ninth floors is in galvanized steel that is painted white, with a 500mm side square section.The heating and cooling system has radiant panels powered by heat pumps. There is a controlled mechanical ventilation and primary air intake system with an integrated dehumidification system.

The façades are clad in travertine slabs (from the ground up to and including the third floor), in white metal sheets (fourth floor (piano nobile) and kitchens on the fifth and sixth floors) and in Carrara marble slabs (from the fifth to the ninth floors). The travertine slabs of the façades of the listed building overlooking Piazza Carlo Erba have been polished and restored. The windows of the property units are in natural wood frames painted white, with the exception of the window frames of the façades of the listed building, which are painted dark gray. The windows of the common areas are in white aluminum metal frames. The original metal door for the main lobby entrance on Piazza Carlo Erba has been retained and restored. The common areas are covered with custom wood paneling and have suspended ceilings. The parquet floors of the units are in natural oak, with the exception of the tiled and grès-clad bathrooms. The building’s lighting is characterized by a particular study of how to enhance both the pre-existing façades of the listed building overlooking Piazza Carlo Erba, and the new body whose curvature is accompanied by LED lighting in the external suspended ceiling of the continuous terraces on the fourth floor. 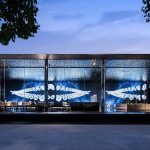 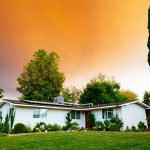