New multi-functional sports arena Portoval is located in Sports park Portoval in Novo Mesto. The 5.000 seat arena will be build till mid of 2013 when Slovenia will host EuroBasket Championship. The arena is as a modern multi-purpose facility providing maximum experiences of sport and cultural events. Organised in three levels it works in synergy with the existing stadium. Beside support programme (changing rooms, medical support, storage, etc.) arena features warm-up hall, fitness and restaurant with view over the city. Project also envisions extension of west stadium tribunes which will be covered with roof. The existing garage is enlarged in the direction towards the arena to provide 250 parking spaces with separate parking for VIP, media and players. Underground parking  enables large open public space on the ground level.

The arena is positioned at the west side of the stadium where the terrain slopes up into the forest. The stadium and arena generate circular trajectories of movement. Pedestrian paths and traffic roads intertwine into coherent fluid spaces organized around two vortices. This gives an articulated and recognisable character to the Sports and Recreation Park Portoval within a new urban image of the city. The size and organisation of the arena follow a tendency to provide a minimally compressed volume covered by a light-weight dome roof.  The arenas volume with appropriate maximum height maintains vistas from the forest to the historical centre and vice versa. The ring, the spatial element around the dome, hosts public programs and enhances the relationship between the arena’s inner spaces and the surrounding terrain. A slight rotation of arena opens up the space in the direction of the most frequent access of spectators from Topliška road. The Arena’s relationship to the stadium creates an inviting public plaza for gatherings before and after events and creates a new urban area for activities such as festivals, open air markets, etc. The arena consists of four basic parts, which are intertwined to form a functional whole – tribune, roof dome, concourse and a ring.

Tribunes form a symmetrical bowl to achieve the most intense atmosphere of the events, this is further emphasised with maximum slope of tribunes and maximum proximity of spectators to the floor area. Furthermore access to the tribunes from above provides a maximum experience of the space while ensuring a high level of safety and short-term evacuation. The lower part of the tribunes is retraceable, providing a multifunctional floor area and allows different configurations of spectator seating for different events. The grandiose character of the space is introduced by a light-weight, single-layer structural dome roof. Diagonal structural members define dynamic interior of the arena. A structural belt at the edge of the dome articulates the space of the concourse in opposition to space of tribunes.

The ring is a roof above the concourse and public programme of the arena, it’s relation to the dome forms a vertical glass belt. The ring is developed as a spatial structure or device which enables natural lighting of the concourse which results also in indirect luminance of the arenas main inner volume. The geometry of the belt defines entrances and exits; it organizes fluent movement between the park and tribunes. The plaza provides easy access to public program within arena such as warm-up halls and fitness areas. Together with the elevated restaurant, this program defines a separate part of arena which is active at all time. Other parts of the arena operate when events are organised. The restaurant hovers above the main arena entrance and thus provides great views to the historical city centre and surroundings. The inner concourses’ two levels provide access from the main entrance to the tribunes. The service programs of kiosks and toilets are located along concourse. Separated access for VIP, media and players is provided at the underground level where media rooms, changing rooms, back stage, medical rooms, storage, technical and maintenance rooms are located. The VIP entry lounge has a direct vertical connection to the VIP loggia positioned at upper floor at the top of tribunes. The VIP area is connected to restaurant and stadium VIP loggia.

Environmental and sustainable approach to energy use is provided by the use of solar panels above the open-air parking, in-floor heating, local temperature air regulation at the tribunes, natural ventilation and lightning of arena and garages. 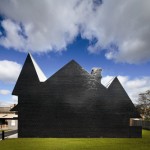 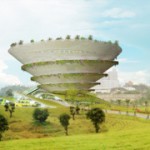