Here is another proposal for the pedestrian Salford Meadows Bridge named The O bridge. The O bridge is a project made in collaboration between Alex Daxböck and Chris Precht from penda. The ‘O’ – A multifaceted object

The aim of the proposal is to create a landmark for the Salford Meadows by turning its structure of the bridge into a formal element, which will define a strong signature for the site. The design is meant to stand as a monument by balancing the tradition of Salford with the green spaces on the Meadow in an elegant, harmonious and inviting way. A landmark not defined how people are interacting with the building, but how the building is interacting with the people. Therefore we created an icon for the Meadows which changes its appearance to people throughout the city. People in the South and North of Salford see the bridge as a disc-like object, where else for people in the eastern and western parts the bridge has a very slim and elegant appearance. Approaching from the Crescent / Chapel Street, the bridge looks like a common swing bridge suspended from a pylon. Getting closer, the bridge is opening up and the ellipses turns into a full circle inviting the visitors to the Meadow. People are interacting with the bridge without even the need of crossing it and therefore the O creates a unique experience for people living and visiting Salford and a lasting formal impression of the Meadows. A continuously truss system is carrying a wooden finishing for a walk path and glazed, semi transparent handrails. With it‘s DDA compliant gradient of 1/20, both endings are generously widened to invite pedestrians. The walkway merges into a a terraced landscape, which can be used for sunbathing during the day and as an open air theatre at dawn. Hence its slope, the landing point of the bridge provides a great view over the Meadows.

The O – cafe was integrated into the sliced landscape with direct view to the Irwell River and the O. A profiled welded steel tube, resting on 2 concrete bearings is the main structural element of the bridge. It supports and carries the structure at the same time. Carrying the loads of the bridge to the bearings, the ellipse enables the bridge to span over the Irwell River without having supporting columns within the water. To avoid forcing to many loads to the existing bridge (Chapel Street), one bearing should move to the landscape underneath the street. During the day, the suspension cables are reflecting the sunlight and the sun’s energy get stored in energy saving LED’s. Therefore the bridge will be glowing during the night transforming the O into a landmark for Salford 24/7. 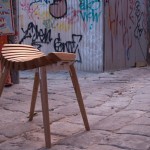 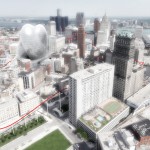