AMO, the research, branding and publication studio of the architectural practice OMA, did the Show Space design for PRADA‘s Fall Winter 2017.18 runway.

For the Prada Women’s Fall/Winter 2017 fashion show, AMO questions and looks at the role that women have in shaping modern society, their political participation and social achievements. In the current moment – one where we are confronted with several cultural uncertainties – it is hard to think that any form of creative production will be exiled from taking a position in favor of the liberal values we share. The scenography identifies the intangible centrality of the contemporary female role both at the domestic and public scale. The set is organized concentrically: while the center maintains an intimate scale, the perimeter is conceived as an abstract exterior. A continuous wooden partition divides the space into a series of consecutive sceneries. This ideal boiserie traces sinuously along the perimeter of the rooms giving an intimate / controlled scale to the set. The sense of domesticity is amplified by the presence of beds, benches and ordinary lamps spread throughout the room defining the rhythm for the overall composition. Beyond the boiserie, the existing wall is invaded by a series of posters that simulate an urban front. – from AMO 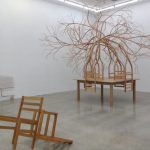 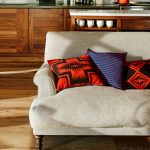