Efficiency Lab for Architecture has recently completed work on the Primary School in Shenzhen, China, as part of their innovative Avenues Shenzhen master plan. The project represents the fifth partnership between Efficiency Lab and Avenues: The World School, an organization committed to giving students all around the world transformative, globally focused learning experiences.

“We have developed an organic relationship with Avenues over the past six years, working on campuses in Shenzhen, São Paulo, New York, Miami, and Silicon Valley, and that has expanded to designing beyond the specifics of a single project to developing a new paradigm for learning environments,”

The Tanglang Industrial Zone is one of the few underdeveloped “urban villages” in Shenzhen’s Nanshan District. Instead of the old policy of demolishing and building new, the government has turned its focus to initiatives that incorporate adaptive reuse of existing structures. Efficiency Lab is in the center of the master planning for the area’s rehabilitation as an educational and research hub, where the former industrial warehouses are being transformed into an urban campus with 21st-century learning facilities that encourage social and exploratory learning. Each campus building will be connected by a network of elevated bridges, and the street level will be activated with areas for play and learning.

“Connections” is the key concept for the campus transformation project, and it occurs on many different levels, from the physical connections in the form of the bridges that create a network of pedestrian walkways weaving the entire campus together to the visual and physical connections made possible by carefully choreographed atriums and interconnecting stairs carved out of the existing warehouse structures. In addition, the ties to nature bring in the most outstanding landscape elements on the property, such as the banyan trees and the freshly planted areas that promote campus life.

“The ‘architecture of connections’ is not about providing paths from one point to another, but rather, creating paths interwoven around spatial attractors, for spontaneous discovery.”

The Primary School adds fresh playspace to the building’s roof and converts the parking lot that was once in the middle of the U-shaped warehouse building into a playground to aid pupils in the development of their motor abilities, as well as their social and spatial experiences. A brand-new running track goes around the structure. The existing building’s exterior was purposefully cut away to increase transparency and let in more natural light. New ground-level activation enhances pedestrian experience and links to the nearby streets. In order to offer shade for a terrace area on the second story, a new canopy was also erected to the façade.

Students are protected from the harsh sunshine by a tensile roof canopy, which also produces dappled lighting below. A biophilic atmosphere is created by the breathing canopy structure and the green wall that runs down the side of the rooftop playground. For this age group—when kids begin to distinguish between movement and life—the incorporation of natural components into the movement space is a crucial design choice because it fosters an awareness of nature and fosters empathy with the surrounding environment.

A climbing wall is erected inside the building as a central hub where people can congregate and learn about various hobbies. The covered playground is situated next to the pleated climbing wall, which is tucked inside a room with skylights. The climbing wall’s substantial height difference from the playground produces a dramatic lighting effect; when natural light filters down the wall, it lifts the atmosphere of the area.Student commons are scattered around the building on various floors to promote social interaction. To create a cozier atmosphere, area rugs and cushioned surfaces are placed around each of these communal spaces, which are also outfitted with bookcases and seating niches made of natural materials like wood. 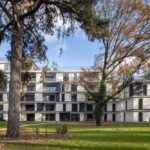 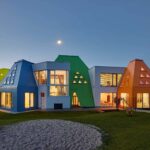