PietriArchitectes deigned a housing project for the city of Massy in the department of Essonne (91). This project, called The Sequoias, is part of an urban complex designed by Leclercq Associés and is unique in that it is located in a biodiverse environment. As a result, the architectural design was geared toward conservation and preservation of the natural environment. Although both buildings are quite different, they are also very similar in terms of colors and how they tend to fit into the environment, which is a highly valued consideration by PietriArchitectes in their projects.

The project is located in the Vilgénis neighborhood, which is in the city’s northwest. The location has a castle and other designated monuments in addition to a natural park of more than 20 hectares. The region was formerly owned by Air France, but over the past ten years it has been transformed into a brand-new neighborhood and a usable public area in the forest.

Leclercq Associés, known for their interdisciplinary approach to urban planning, architecture, and landscape, handled the redevelopment project. The urban program, which is situated in front of the park, contributes to the landscape by protecting the site’s biodiversity and visual perspectives. The architectural firms KOZ Architectes, Itar Architectes, and Ameller Dubois, among others, effectively met the environmental standards when they designed the residential dwellings. With the creation of two buildings that are appropriate for the location and the worldwide strategy, PietriArchitectes’s role is established.

The studio’s project consists of a 76-unit curriculum split into two volumes. The property has two distinct architectural identities and is organized around a garden that still contains numerous impressive trees.

The first building is a cube-shaped monolith with overlapping duplex apartments. The homes’ solitude is provided by the brick façade on the north side, which is pierced by stealthy windows. Generous balconies built of unfinished concrete that are located on the garden side resemble an exoskeleton. Apartments in the second building are arranged in layers according to the topography, allowing them to take advantage of the structure’s advantageous solar orientation. Additionally, each apartment includes a sizable terrace or loggia. The two buildings were planned to preserve the site’s existing trees, including a magnificent black pine.

Beige brick, a light-stained plaster, charred wood a la Japanese design, and precast concrete are the materials and colors used in the buildings. The wood that is burned is made from plant biomass and is produced according to a traditional Japanese technique. The majestic black pine in the location is echoed by its dark color. Dark wood woodwork is used throughout the entire project to draw attention to the unique designs of the buildings’ entrances. Despite a damp climate caused by the presence of the forest, the materials utilized are noble and sustainable, and they satisfy the aim for sustainability and total harmony.

A new road and a pedestrian path that connects the park and the populated woodland around both structures. The parking space is accessible from the bottom floor, which lessens the visual and acoustic disturbances caused by cars. The garden is built on top of the parking area, taking advantage of the topography to avoid a deep excavation. The facility also anticipates future needs by providing more than 100 bicycle parking spaces. All of the roofs have vegetation and are connected to a rainwater collection system in order to meet the sustainable aim. The preserved trees and site topography were taken into account while determining the height of the West and East buildings.

PietriArchitectes wants to protect the existing vegetation while putting the forest at the center of the project. In order to maintain the uniqueness of the site, every tree that was cut down during construction was actually replanted. The building volumetrics produce visual breakthroughs that bring ventilation to the area and establish a garden that is exposed to the neighborhood in order to balance the relative congestion of the park. 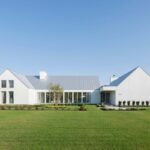 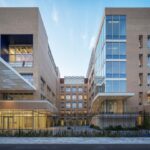