UNStudio was recently selected as the winner in the competition for the first ever cross border cable car, which will carry passengers across the Amur River to connect Russia and China. Take a look at the complete story after the jump. 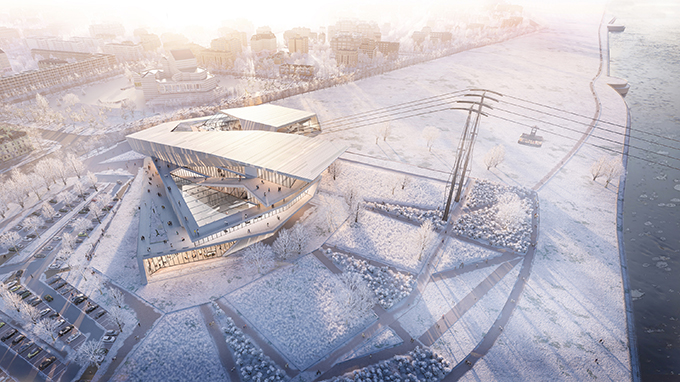 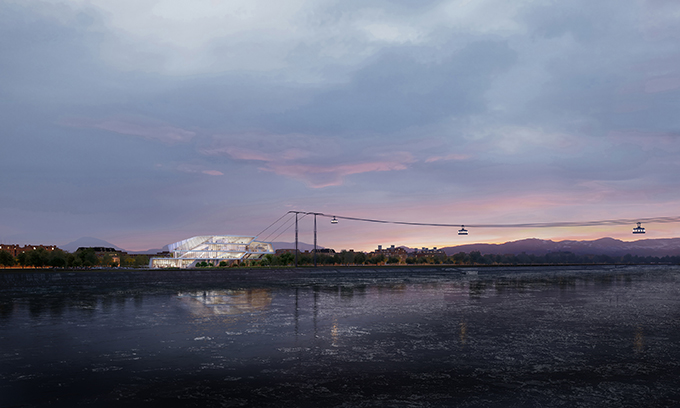 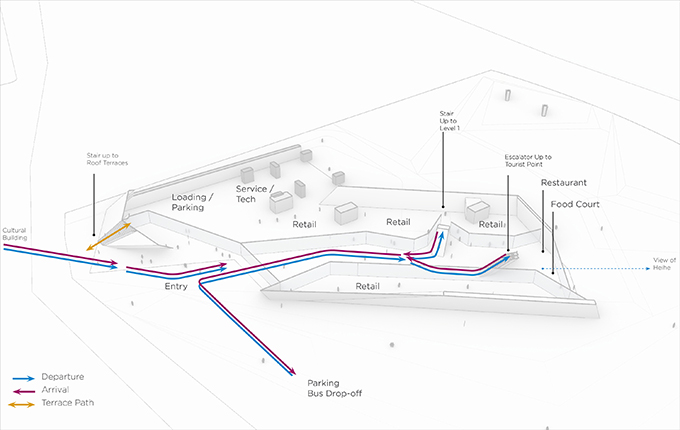 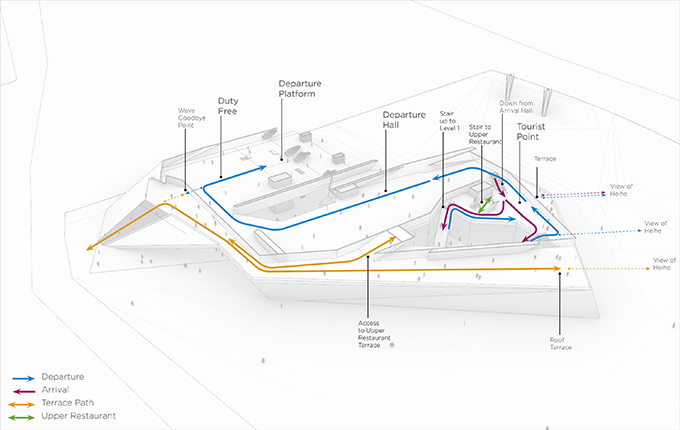 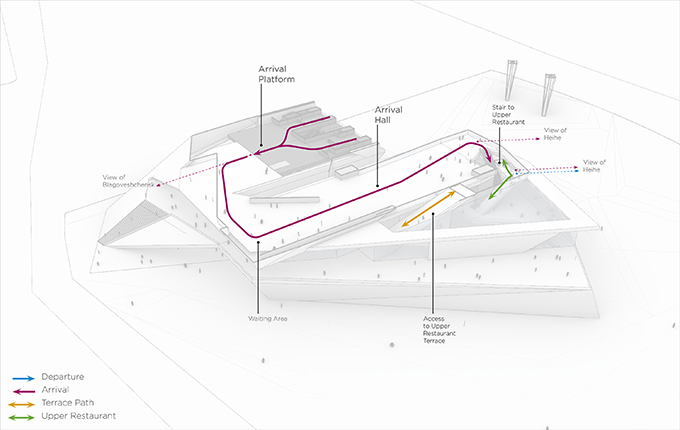 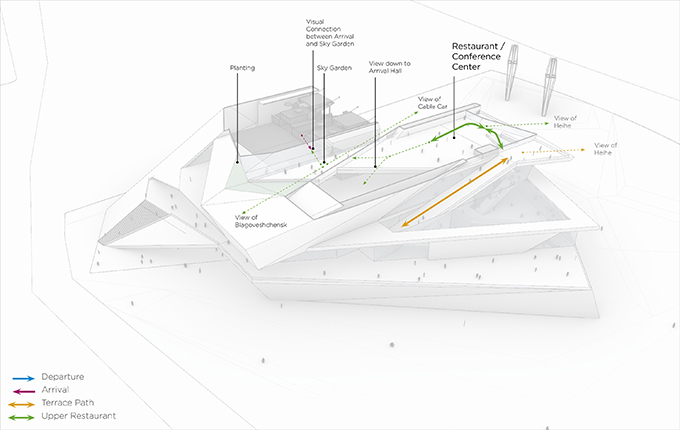 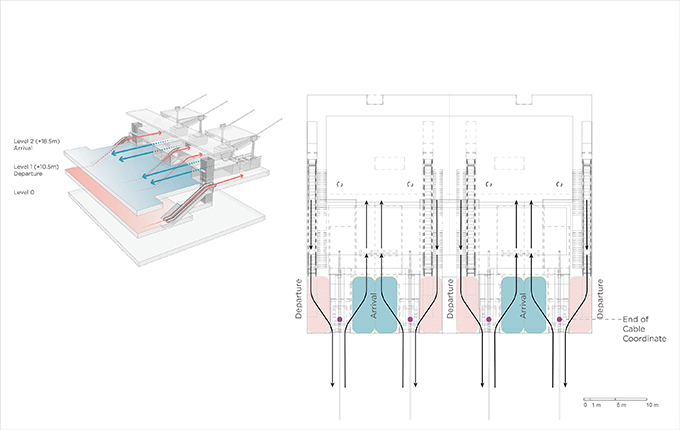 From the architects: Following a vision round involving 12 practices in the invited competition managed by Strelka KB, UNStudio and Coop Himmelb(l)au were selected to submit design proposals for the Blagoveshchensk Terminal Station in Russia for the second phase.Strelka KB were also responsible for the economic and functional model of the Cable Car Terminal.

The new cable car line will connect the cities of Heihe in China and Blagoveshchensk in Russia in a matter of minutes. Comprising 2 lines and 4 cabins – each with a capacity of 60 passengers and extra space for luggage –journey time will be approximately 7:30mins, while actual travel time will be 3:30mins.

Ben van Berkel: “Cable car systemsprovide a new form ofpublic transport that is sustainable, extremely fast, reliable and efficient. Although primarily a pragmatic solution, cable cars are also a very congenial way to travel as they enable us to see and experience our cities in a whole new way.”

Ben van Berkel: “As it crosses the natural border of the Amur River, the Blagoveshchensk – Heihe cable car will be the first ever cable car system to join two countries and cultures. This context provided rich inspiration for the Blagoveshchensk terminal station, which not only responds to its immediate urban location, but also becomes an expression of cultural identity and a podium for the intermingling of cultures.”

The Blagoveshchensk Cable Car Terminal is designed as an expression of the historic connection between two cities of Blagoveshchensk and Heihe.Since the mid-19th century, the Amur River has defined the natural boundary between Russia and China.However, when frozen over with thick ice, the river literally supports trade, commerce, social connection and a growing relationship between the twocities.

This frozen river became an important reference point for UNStudio’s winning Cable Car Terminal design. The building takes this historical connection as an inspiration for the organisation of programmes, materialisation, spatial quality and curated views of both cities. Much like the ice on the river, the building becomes an engine for creating social connections between two cultures anda beacon for a joint prosperous future between the two nations.

The location of the terminal curates the visual relationship between Blagoveshchensk and Heihe. First by creating an elevated viewing platform over the Amur towards Heihe, and second by framing the view from the arrival platform of the cable car back towards the city of Blagoveshchensk.

By offsetting the terminal from the existing boulevard along the river, a welcoming spaceis created for visitors from Heihe and connections are established between the new natural starting point of the golden mile – a long stretch of golden sand along the river – and the green plateaus of the terminal.
Urban Tribune: a new cultural connection
In order to create a cable car system that could land directly into the Golden Mile, it was necessary to raise the platform height. The resulting stepping of the Blagoveshchensk Terminalpresents the perfect opportunity to create an Urban Tribune: a new shared urban space that connects the terminal to the existing Blagoveshchensk Cultural Centre on the other side of the esplanade.

This newly proposed square forms a cultural focal point forBlagoveschensk, connecting the city to the river andupgrading the city with a new space for events and performances. Simultaneously, a pedestrian connection that passes through connects the cultural square with the Golden Mile alongside the river.

The terminal building is shaped as an open and welcoming gesture, allowing visitors to enjoy commercial spaces in one connectedmovement, with a clear navigational direction towards the departure platforms.
Upon arrival, a similar natural route unfolds, guiding visitors from Heihealong commercial, gastronomic and culture spaces.The building’s internal circulation is reflected on its exterior, thusopening its cultural and commercial programmes towards the public realm of the city of Blagoveshchensk.

A series of green plateaus

The shape of the building also enables the raising of the park towards the roof of the terminal. Beyond creating a space to greet arriving passengers, or to wave goodbye to those leaving, the terraces and green plateaus act as an elevated urban park, creating a green space for urban arts and sculptures, and viewing points over the whole Golden Mile river-scape.

The green on the building naturally blends with the park that is proposed for the area between the terminal and river, as well as with theadjacent parking area, which has a green axis that largely hides the parked cars from city views and the boulevard. 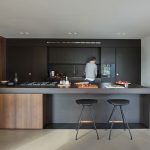