Project: Taiwan Tower "FORMOSA"
Designed by Sou Fujimoto Architects
Location: Taichung City, Taiwan
Website: www.sou-fujimoto.net
Sou Fujimoto Architects share with us their winning proposal for the design of Taiwan Tower "FORMOSA", this remarkable project is set to become the 21st century's counterpart to the Eiffel Tower. Elevating the rules of green-architecture Taiwan Tower will house a modern day with a roof-top garden suspended 300 meters above the ground.

Our proposal for the Taiwan Tower, and the model for the Green-Architecture of the new generation, is the 21st Century Oasis.

This Tower proposes a new Typology of a Tower akin to transparent cloud, mist and alike, which is unlike any other Towers in the past.

The 2 main source of Inspiration comes from Taiwan itself;

Banyan Tree – Inspired by the Banyan trees, creating a comforting urban plaza like space under a tree, this place will be a beautifully pleasant public space for the people of Taichung, formed by transparent delicate structural frame. Formosa – Divine Taiwan island – Inspired by Formosa, the proposal presents a floating roof-top garden soaring 300m above ground, as a symbol of the divine island.

From nature and culture of Taiwan itself, to the innovative design of the Tower for the new era.

This Tower will symbolize not only Taiwan, but the Environmental era of the 21st century.

Roof-top Garden suspended 300m above ground level in the sky provides the people of Taichung with an Oasis in the city.  This green-filled Garden will be visible from everywhere and will be a symbolic landmark and existence. New Typology of the Tower. The Eiffel Tower when it was conceived in Paris marked the age of 20th Century, and became a role-model for many Towers to follow. The tower proposed here is a Tower as an origin of 21st Century. We see the Taiwan Tower undertaking the role that Eiffel Tower had undertook in Modernity for the 21st Century and beyond. This is a typology of Tower that has never before existed. Sited within the Taichung Gateways Green-belt, the Tower exist as a comforting resting place for the surrounding campus and the adjacent cultural zones, the Tower will provide a plaza-like space in direct continuation to the Green-belt.

And by the Green extended above in the roof-top Garden, the formation brings a three-dimensional continuation of the Greenery and Garden.

This Tower will create an Urban Oasis in the Taichung Gateway, in the intersection of where Transport/Education/Culture/Nature converge. The Tower has within it, a public Observatory function with public services such as shops and cafe, and Museum of Taichung City Development., as well as large exterior spaces which allows for diverse uses and functions.
（*プログラムについて）

The primary structure is made from Steel frame with generous space for attaching various renewable energy systems and lighting fixtures, making the Tower itself a large energy-producing device and landmark which is visible from all over Taichung.
（*構造とグリーン建築について)

The Taiwan Tower opens to the public at the start of 2017. 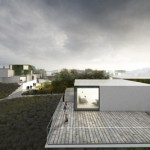 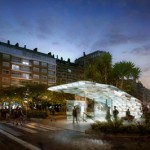