Fujiwaramuro Architects this inspiring modern residence located in Muko, Japan, in 2012. Take a look at the complete story after the jump. From the architects: The house is located in a neighborhood some distance to the south-west of an area in Kyoto known for its historical buildings. Despite its being in Kyoto, however, this particular neighborhood is a newly developed residential area filled with contemporary buildings and lacks any sense of the traditional cityscape. The plot of land on which the house is built is shaped like a fan with roads bordering the southern and eastern sides and a bamboo thicket on the west side. It sits near the top of a hill that slopes upward from east to west. The owner purchased this land because of its unusual shape, anticipating the building of an interesting structure. In addition to his desire to capitalize on the shape of the land, the client also requested the inside of the building to be one continuous space with no partitions between the rooms. Our conception of the design was based on these two factors.

One feature of the site is that there are no buildings adjacent to it other than on the north side. It is situated so as to receive a lot of sun light, especially on the eastern and southern sides. Due to this exposure, we decided to make the element of light the central axis of our design. We made it our aim to create a residence in which one could experience the movement of the sun from within the house.

We set gigantic louvers in place on the south side of the building, 8 meters tall and numbering thirteen in total. The use of louvers allows for light to reach far back into the house and they also serve as blinds, blocking the line of vision from the road. The light shining from the south enters in from the east, hits the louvers and is reflected back, scattering into the house. In the morning, the light gradually increases, reaching a climax at midday. At this time, the direct rays of the sun striking from the south form lines across the room like a shower of light. The design has similarities to trellises on the façade of merchant houses in Kyoto and also brings to mind traditional Japanese partitions, paper sliding doors called shoji. The lattices found on the façades of merchant houses make it difficult to see into their interiors from the outside. The use of shoji allow for light to be dispersed far into the house. The gigantic louvers combine these two functions. The sunlight coming in from the west hits the wall of the atrium and is reflected back into the room. A view of the bamboo thicket can also be enjoyed from the windows facing the west on both the first and second floor. Another feature of the exterior are the Mexican “Yucca rostrata” plants, which are planted on the south side.

The inside of the house is a large one-room split-level dwelling space. On the first floor is the kitchen, dining room, living room and bed room. Since the request was for a unified space, we sought to make the structural pillars inconspicuous by incorporating them into the layout of the kitchen. The lower section of the 2nd floor contains the playroom, and the study, the wash room and the bath room can be found on the upper part of the 2nd floor. On top of all of that sits a rooftop deck space.
The playroom on the 2nd floor is an open space that is like an extended landing of the staircase. Its size was configured so that in the future it could be divided into separate rooms for the two boys. The 2nd floor of the house is a skip floor. The north side of the property line is affected by regional regulations which limit the height of the building to 5 meters from the ground. One of the conditions in designing the house was to provide a spot for the wife’s dresser, a marriage gift. However, making room for the bureau on the 2nd floor meant the height of the ceiling on the first floor had to be adjusted accordingly, and the low ceiling ended up giving an oppressive feeling to the space. We decided to raise the level of the ceiling on the south side, which is not under the same regulations, in order to bring in more light. The result was a skip floor. The top floor makes use of the crevices in part of the louvers as storage space. From the bathroom, there is a view of the bamboo thicket. From the rooftop, one can look out over central Kyoto and also see the Daimonji, a traditional event in which the character 大 “dai” is formed by fires lit on the side of a mountain in Kyoto. In summertime, the rooftop is used as a place for the children to play in their pool and also as an outdoor dining area in which to enjoy eating and drinking.

At night, the light from the openings in the louvers leaks out into the street softly illuminating the surroundings. By inserting lighting on the inside of the louvers, the house can be lit inside and outside simultaneously. When the house is lit up, the interior can be seen from the street, but the owner decided to have some fun with this by placing seasonal decorations in the openings. At night, the entire building gives off a soft glow, becoming like a giant light fixture gently brightening the neighborhood. Japan passes through four seasons throughout the year, with the position of the sun being lower in winter and higher in summer. The level of humidity also lowers in winter and rises in summer. Due to these fluctuations, there are subtle alterations in the condition of the light and the appearance of the surrounding landscape. Thus, the house in Muko is a residence in which one can experience variations in light and changes in plant life in the area throughout the four seasons. 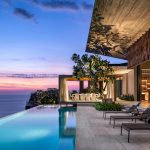 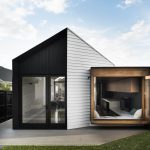