Rockwell Group has recently completed the interior project for the Nobu Hotel Barcelona. The project includes guestrooms and suites along with meeting rooms, event spaces, a pool and spa, and Nobu restaurant. Take a look at the complete story after the jump.

From the architects: Rockwell Group, the leading New York architecture and design studio, has unveiled the interiors of Nobu Hotel Barcelona, including guestrooms and suites along with meeting rooms, event spaces, a pool and spa, and Nobu restaurant. Nobu Hotel Barcelona translates the best elements from Nobu Restaurants into a fully realized experience, reflecting the innovation and imagination that has become synonymous with the name Nobu. Capturing the unique essence of the famous European city while reflecting the brand’s core aspirational lifestyle offering, the hotel is a refurbishment and renovation of the former Gran Hotel Torre de Catalunya.

Rockwell Group took inspiration from iconic Spanish design, such as the mosaics in Park Güell by Gaudi, and traditional Japanese crafts, referencing Kintsugi, the art of repairing broken pottery with lacquer dusted or mixed with powdered gold, silver, or platinum, to create a collage of materials, textures, and spaces.

The entrance is quiet, mediating the boundary between the hotel and the street with a garden of tall bamboo trees behind a rammed earth-inspired wall. Shinto gates are abstracted around the entry vestibule in the form of a bright orange, woven screen, which continues inside to create a connection between outside and in. The double-height lobby features textured limestone and wood and a large piece of art behind the check-in desk features a dramatic brushstroke—a touchstone of Nobu.

A grand staircase connects all the public areas including the ballroom, meeting rooms and lobby, and is accentuated by a large art piece that is suspended in the stairwell. The monumental, rough stone lobby bar is lined in pale, gridded wood with simple joinery. Cracked stone with gold infill covers the faces of the central columns. The lobby lounge is framed by gridded wood echoing the hotel’s bar, but here is stained indigo blue. The hotel’s lifts are clad in three-dimensional walnut and gold tiles with rammed earth-inspired panels that reflect those in the entrance.

Guest corridors have a vibrant, saturated gradient of green to blue wallcovering and a large, continuous brushstroke on the carpet guides guests to their rooms. In the guestrooms, a millwork wall with geometric bronze framing has a wardrobe, TV, bar, and desk. Bronze detailing also defines the bed area, which has a wood and leather headboard and footer. Custom plaster art pieces hang above the headboards in a signature Nobu “swoosh” pattern.

The suites have sofas that sit on plinths and millwork in saturated lacquer colours, with an overall moodier feel than the guestrooms. The Presidential Suite has a central, sculptural Japanese tea hearth made of rough carved stone. Bathrooms feature slab stone and cedar wood, and include a traditional Japanese soaking tub separated from the shower area by ceramic tile screens.

Nobu Restaurant sits at the top of the building with 360-degree views of the Catalan Capital. A kintsugi-inspired ceiling has suspended live-edge walnut panels with gold “cracks” in between. 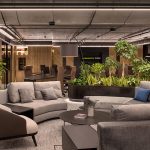 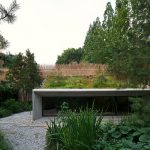