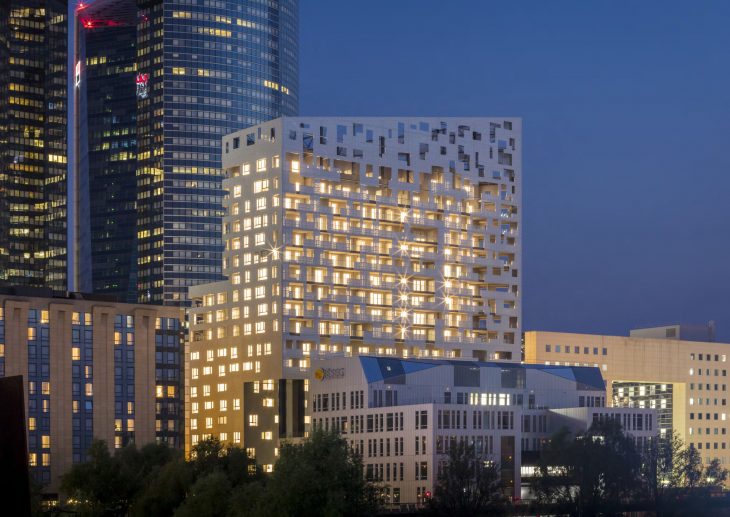 The tower is located in the heart of the district of La Défense, willed into existence in the 1960’s by Général de Gaulle to show the world that France was entering into the modern world of finance and business. It’s a curious above-ground urban mixture, an artificial island, veritable realm of “corporate architecture”. 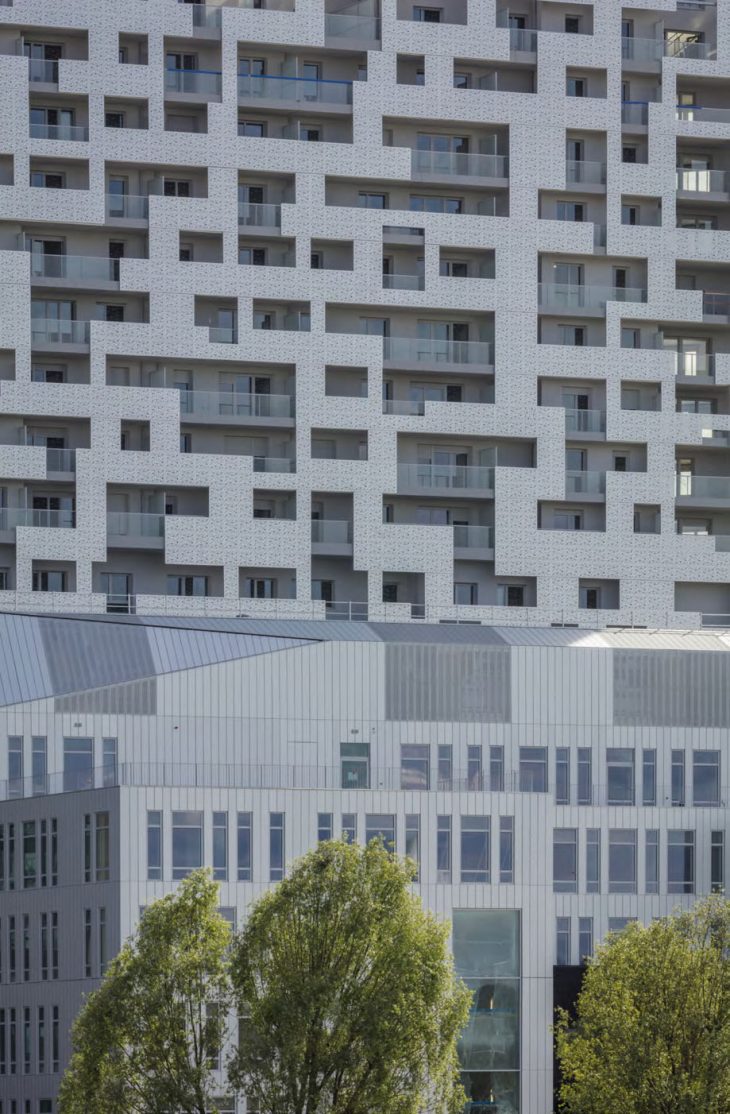 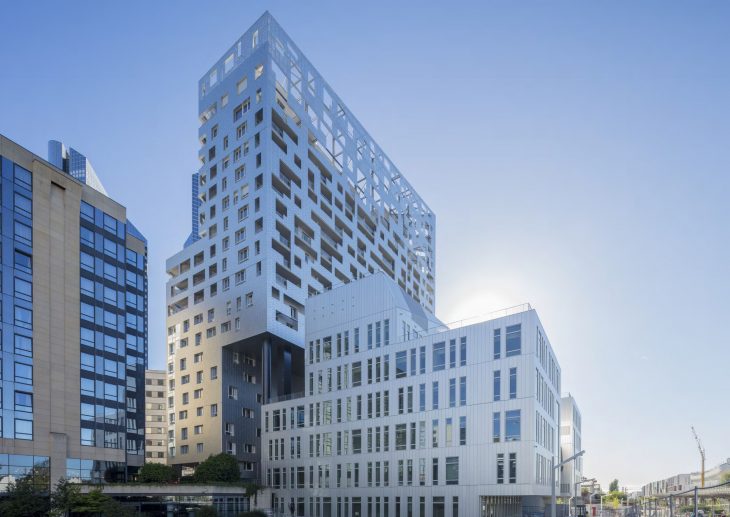 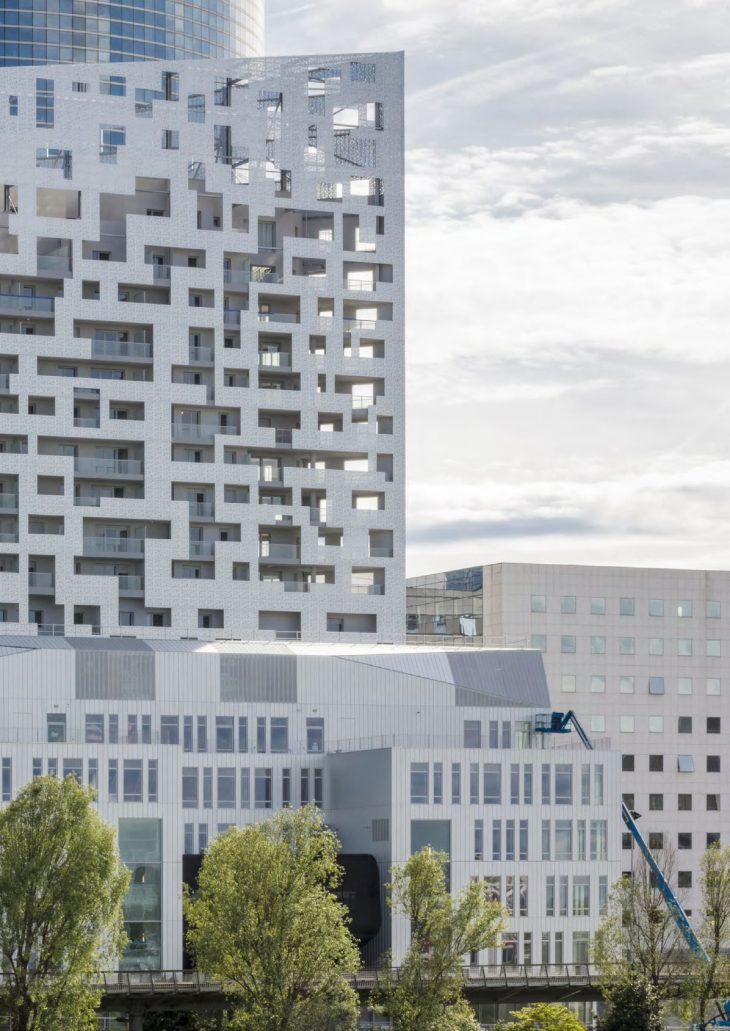 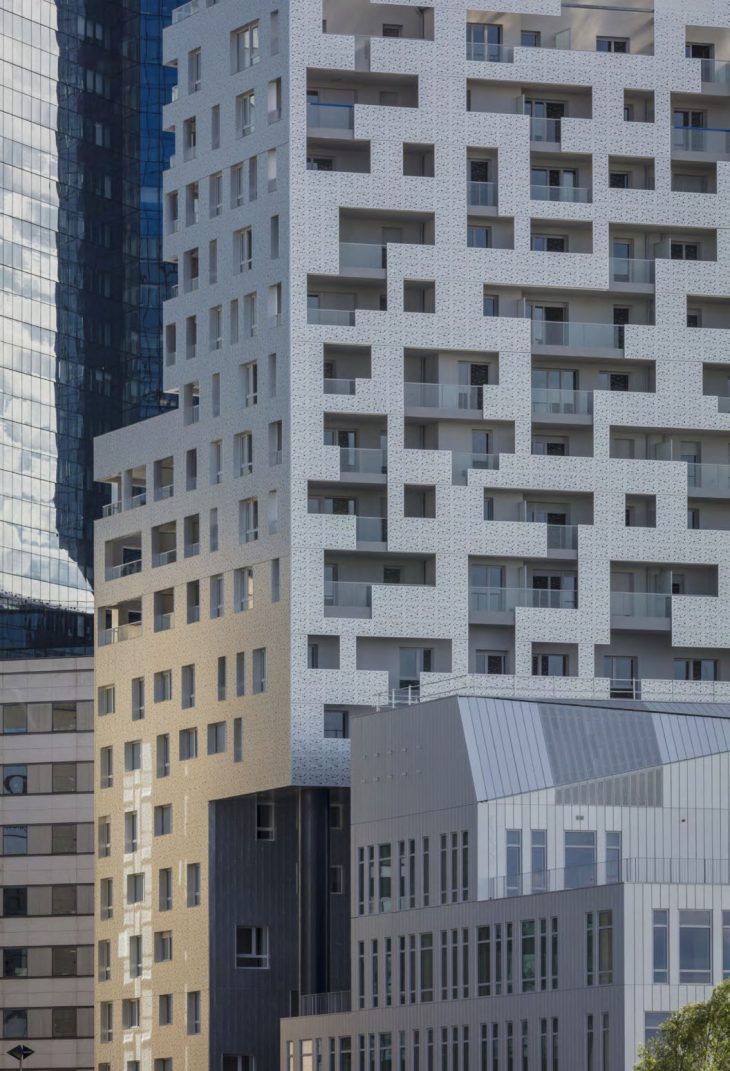 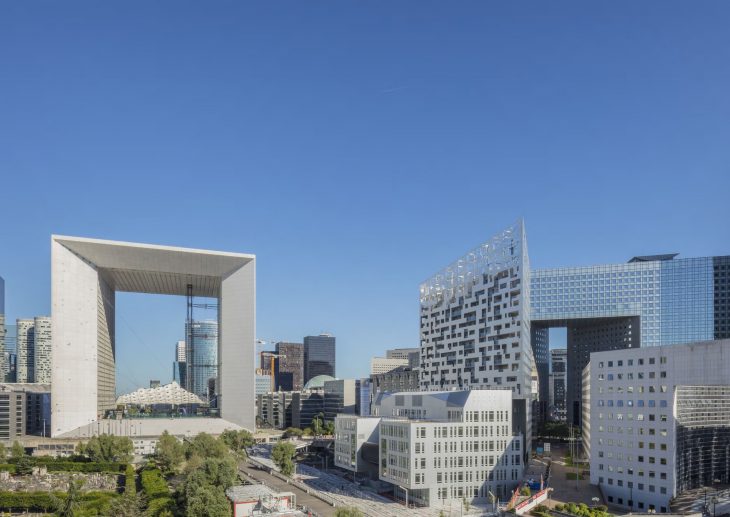 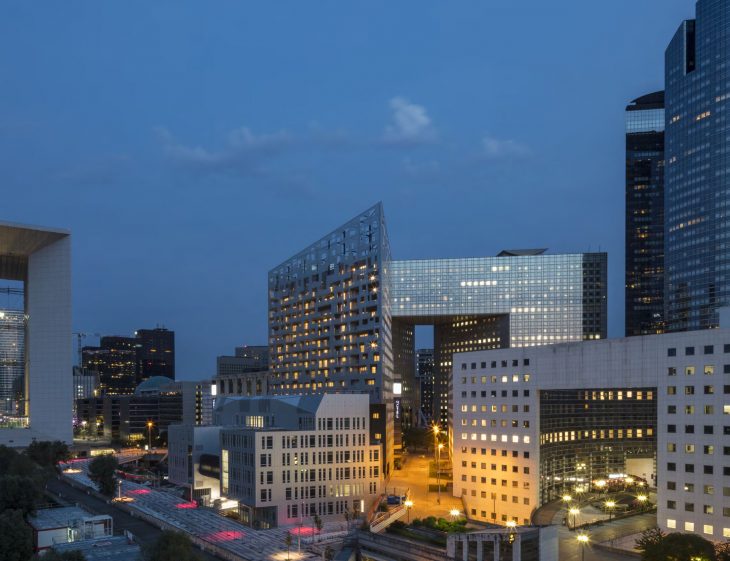 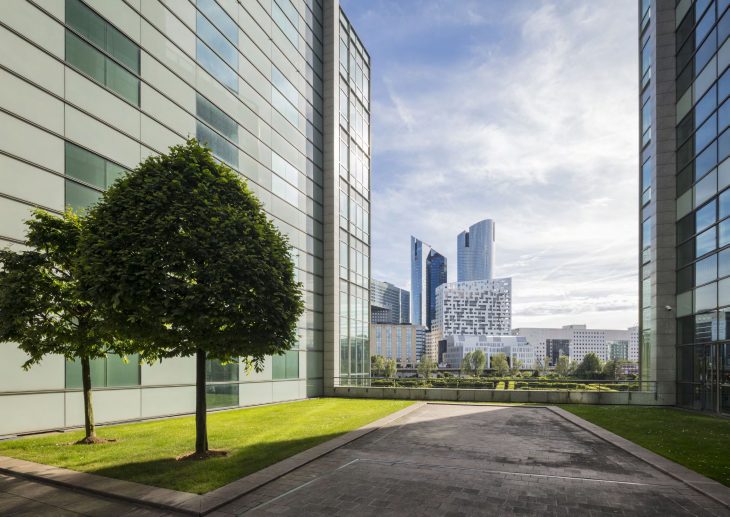 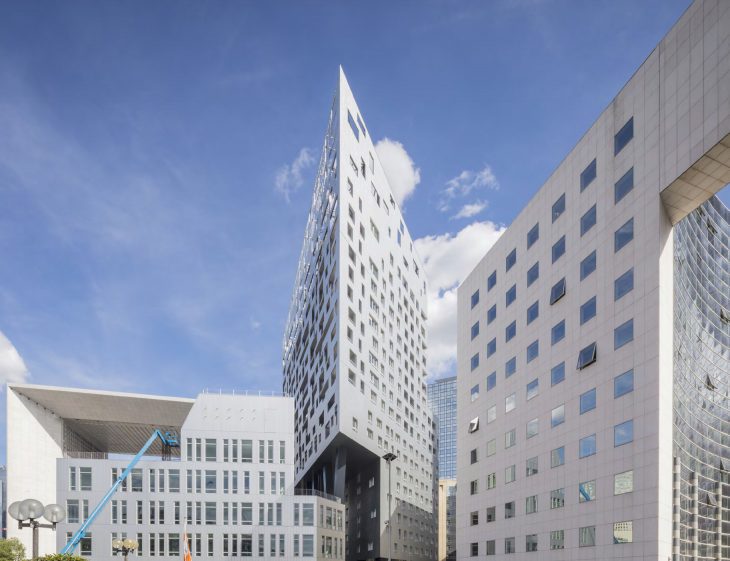 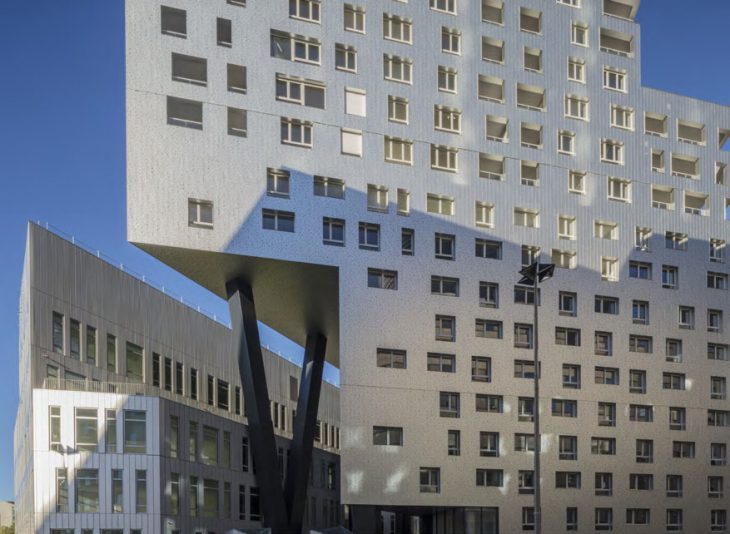 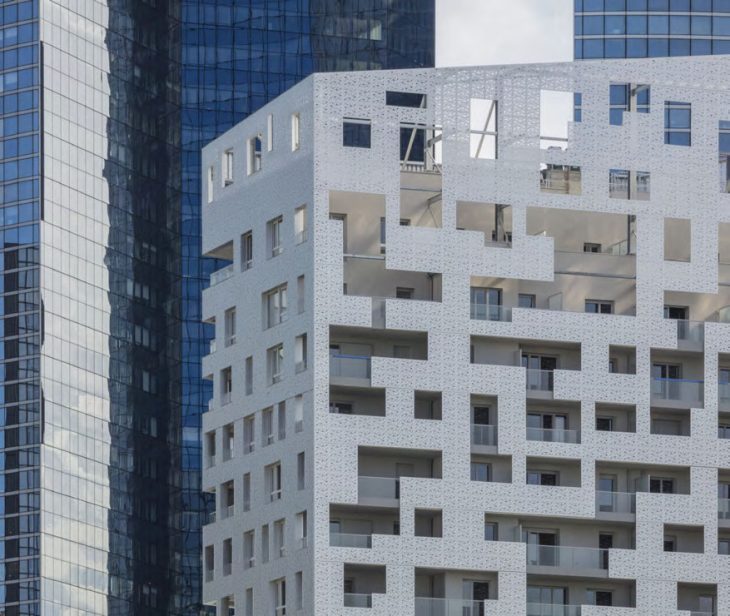 “The opportunity to build apartments at La Défense remains a rare one. All the more so an apartment tower (top floor at 50 m). In fact, some thirty years have passed since the building of the last one. The district of La Défense, willed into existence by General de Gaulle to show the world of the 1960s that France was entering into the modern world o finance and business (the famous “Trente Glorieuses” or thirty-year post-war boom), is a curious above-ground urban mixture, an artificial island, veritable realm of “corporate architecture” punctuated by multitude of high-rise office towers, business centers, rather hollow official monuments, shopping centers and a few public housing complexes, the whole placed atop an immense, windswept concrete slab and irrigated from below by a labyrinth of vehicular arteries, railway tunnels among other piped networks.
The two main materials cover these basic geometric forms blue or green tinted glass, and occasionally bronze, and patinated, brushed or thermo-lacquered steel. Nature is rare here, being expressed most often in the form of jardinières and potted plants, and even in flat and shallow basins reflecting the climatic variations of the sky. Inhabitants only occupy these places during office hours because social life is essentially work-related.
To frequent this world early in the morning or late in the evening is an enriching aesthetic experience, for one has the paradoxical impression of being in full daylight, because the offices remain lit all night long… Another interesting sensation is that this place gives us the impression of being unique, (alone) in the world! Even if it is a bit dated, we recommend seeing Bertrand Blier’s film Buffet Froid, which is a relatively faithful reflection on the very particular world of this business district.

For the last few years, the Établissement Public d’Aménagement de La Défense Seine Arche has been attempting to re-humanize this urban area by  densifying the few remaining unbuilt areas with the construction of housing. It was under the framework of this effort that we participated in the consultation organized by the Epadesa and Nexity, responsible for project management.

The competition was a very stimulating one because it required superimposing two housing programs above railways, with the lower section of the tower containing 168 student apartments and the upper section, 112 ownership program apartments – the trapezoidal lot being located just behind the Grande Arche, on the town of Puteaux side, atbthe foot of an elevated walkway designed by Paul Chemetov. The lot’s main shortcomingbwas the fact that the great width of the trapezoid was oriented northward and that,bon the southern side, we were prohibited from creating bays. And yet, we had to designb11,000 m² of inhabitable surface area. To come up with the ideal form, we applied the Take Zoning method as a design guideline and adapted it to the site by means of multiple scale and 3-D models.

The idea we were pursuing was to optimize the openings on the south side by proposing a strong unitary form in the shape of an easily identifiable “round hump.” Our work on the building’s profile is what enabled us to resolve the challenge of providing views and maximum sunshine despite the shape of the lot, thanks to this 8-m cantilevered upper section supported by a series of 25-m columns – in homage to 20th-century modernist
architectures – in the V, I, O, X or square forms. In addition to these aforementioned challenges, we also had to place this building above three tunnels of train tracks of the high-speed suburban line A.

The entire edifice, isolated by its exterior, is clad in perforated cassettes panels made of anodized aluminum to enhance its homogeneity and underscore its presence facing the neighboring towers built in the 1980s, the worst period of 20th-century architecture.”

The project is comprised of three main elements:

The approach consists of reinterpreting these three elements in light of the specific features of each site: the resulting architecture becomes unique, thereby reflecting the intrinsic characteristics of the context.

Beyond these architectural criteria, it is first and foremost about proposing a new way of appropriating the vertical space of La Défense with varied and ambitious housing programs blending large scale with new categories of users/occupants. 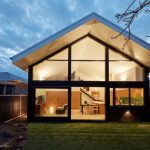