Designed in 2015 by Architect Jean Nouvel, this contemporary tower situated in Nicosia, Cyprus, transforms the city silhouette. Take a look at the complete story after the jump. The iconic tower designed by Jean Nouvel at the center of Nicosia, next to Eleftheria Square transforms the city silhouette of Nicosia. The program includes 10- story residential apartments, a 6-story office space and a 2-story retail area. This verticality in relation to the horizontality of the medieval walls and the moat that enclose the old part of the city sets the stage for a series of inversions that are characteristic of the building. The 67 meter high building will be the culminating landmark of the city.
On the south façade a vertical landscape covers approximately 80% of the building’s façade area. This exceptional living environment is working like a natural “brise soleil”. The plants will act as a natural sun control shielding the apartments and the offices from direct sun during summer while admitting a maximum of sunlight in winter. This “living “façade” supports a variety of Cypriote climbing and spreading plants and will be continually transformed by the cyclic movements of the different seasons. 400 years old olive trees continue this vertical landscape on the perimeter of the building. It creates the link to the adjacent urban park and gets a part of the scenery of the city. The apartments and office feature indoor/outdoor loggias that extend the living space outside to take maximum advantage of Nicosia’s temperate climate.
On the north façade, the loggias extend out to take maximum advantage of views toward the park and the city skyline. A series of cascading terraces and large balconies acknowledge the Mediterranean climate and the significance of spending time outside.
On the east and west façade the loggias extend in from the pixelated concrete walls façade to protect residents and office occupiers from noise, wind and sun.
Punctured by a random array of openings, sometimes glazed sometimes left open, especially in the garden areas, the massiveness of the walls is negated by the numerous perforations. Interesting shadow games determine the exterior and interior space in relation to the different sun position of the day. An accumulation of voids and windows shaped by a size of 0,40m x 0,40m creates a unique screen image from the outside and inside point of view. At night the wall as a giant screen is pronouncing the inhabitants light needs and strengthen even more the random system of the facade.
On the top two floors of the tower, a duplex apartment is organized around a central court-yard inspired by the Cypriot traditional architecture. Three large shades protect the apartment from the summer sun and emphasize the view to the sky.
The project will push the integration of landscape and tower architecture to a new level and offer Nicosia a new architectural icon that symbolizes the city’s future. 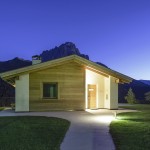 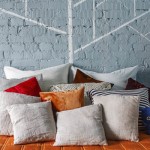